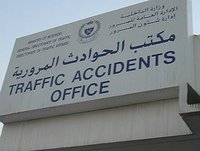 The pleasant man--in sandals and shalwar kameez--who had just plowed his Nissan pickup truck into the back of our rental car nodded with delight at the Professor's guess.

The Professor has some secret method of divining a person's home region just by looking at the person. Okay, I thought, maybe it's the fact that nearly every Pakistani in Bahrain (prounouned Bah-hrain with a mild break between the syllables) is from Peshawar. And if someone is in a shalwar kameez, it's a safe guess is that they are from Pakistan. I have one myself from when I visited Pakistan, and use it as pajamas at home.

The flight from Kuwait to Bahrain had taken only an hour. It would have taken me the same amount of time to commute from downtown Jersey City to The Professor's Columbia area digs in the mid-90s. The Professor was waiting for me outside Customs.

Bahrain seemed so mild compared to Kuwait, which has to be because it has a quarter the population and is tiny—only 3.5 times bigger than Washington DC, which is a compact city and not an urban sprawl. (Okay, it's a sprawl if you include Maryland and Virginia, but I mean the actual boundaries.)

The mildness seems to apply to traffic accidents as well. In Kuwait, cars regularly flip over or get flattened. In Bahrain, we drove out of the airport and onto the bridge that connects the airport island to the bigger island. Traffic moved slowly, but there were no sudden stops. Brake lights were apparent across the bridge and we slowly halted behind the long line of stopped cars.

The Professor was just updating me on his personal life (someone has to have one) and WHAM. Smashed from behind. My bearclaw hair-clip fell out.

I had a flash of anger. What the hell? Was the driver spacing out completely? 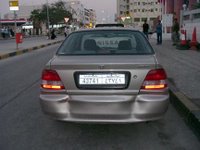 But The Professor got out of the car first while I rummaged through the glove-box for the insurance paperwork. By the time I joined him on the road, he was swapping friendly banter with the Peshawar guy.

Both drivers called people on cell phones, and our instructions were to proceed to the traffic police office. There, papers were looked at, reports were written, and we were sent on our way.

"Whose fault?" asked the policeman.

"His fault," said The Professor at the same time that the Peshawar man pointed to himself.

Not a big deal, apparently, except perhaps, for the guy who owns the rental.
Posted by Marie Javins at 10:38 PM