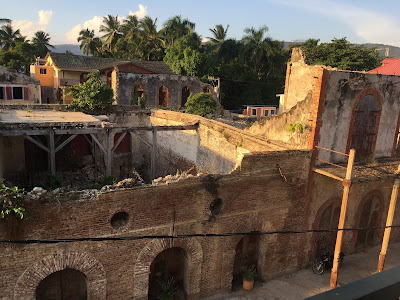 At 6, I hopped out of bed in my Jacmel hotel and turned on the shower. The water takes a minute to warm up, so doing this involves consciously ignoring one's guilt about water shortages in Haiti.


I hurried downstairs right before breakfast started, but service was taking too long. I watched impatiently as the staff showed up, and eventually my coffee did too. I was nervously watching the time. On my three-hour ride down, I'd just missed the previous bus (what can I say, I was on a plane), and I had to wait two hours for the next bus. And the downtown Port-Au-Prince bus depot is not the kind of place where you whip out an iPad and start reading. This is what paperbacks were made for, but I'm not carrying one here—I went with carry-on luggage only, one tiny backpack and my handbag.

After forever (more like only 12 minutes), my breakfast was in front of me. I wolfed it down, ran upstairs for final preparations, shouldered my pack and my re-useable supermarket bag of souvenirs, handed my key to the young woman at reception, and headed out.

The walk to La Source bus depot (more a tiny lot the size of a driveway) takes about ten minutes. It's nothing really, but feels longer when carrying luggage. Even when packing light.

"Taptap to Port-Au-Prince?" A man on the street tried to wave me down. I assumed he was interested in a tip for guiding me to a taptap, Haiti's choice of public transportation. It's a small truck with a covered bed lined with hard benches. "Non," I said. "La Source."

When I got to La Source, the depot was sadly desolate. Two employees were there, but no passengers.

Oh crap. Yesterday's demonstrations in Port-Au-Prince meant the buses were not traveling today as a precaution.

The young woman at La Source explained to me as carefully as she could given our language difference, that I could go to the taptap station and see, but she did not think I would have any luck there either. She told me the ride to the taptap station was 20 gourdes—a quarter, basically. I had a 25 note in my pocket, so walked outside and flagged down a passing motorcycle taxi. 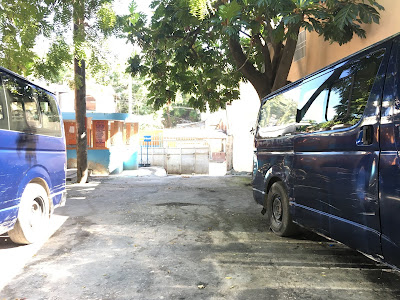 Off we zipped down the road for a few kilometers, finally pulling up to the taptaps.

The situation did not look good. There were several police officers standing around, looking authoritative and police-y.

One of them explained to me that today there were no taptaps to Port-Au-Prince. It was forbidden.

I took the mototaxi back to Rue du Commerce. But before I left, the policeman stopped us again.

He said something to the moto taxi driver, who adjusted how I was holding my bags. Oops. Sorry.

We zipped back to town. I got off the mototaxi and walked down the pedestrian street. I ran into Michel, the guide who eternally sits in front of Hotel Florita.

He asked me all the questions I would have asked me if I had not already looked into it. Did I want to take a taptap instead? Did I know there was more than one place to catch a bus?

Yes, yes. I tried not to let my exasperation show.

I walked over to my hotel so I could grab a wi-fi signal, and used my phone's Skype to call the private airline that goes around Haiti.

"No, we have no scheduled flights today." I am on their waiting list in case someone books one, but to fly just by myself, besides being outrageously wasteful, is $274. I'd do it in an emergency, but wanting to get to PAP in time to take a day tour with a focus on Haitian cuisine was not an emergency.

Michel knew a private driver, so he gave me his number. Antoine did not speak English, and while I was able to explain to him in French what I needed, I could not understand his response. I gave up and took to texting him in Creole with the help of Google Translate.

The road is blocked. Ah.

I headed over to Tourist Information. They confirmed what everyone else had said. It's $150 set rate to take a private car, even for Haitians. "When I went to Canada, it was the same for me to take a car to the airport," said the tourism official.

But it doesn't really matter how much a private car is when the road is blocked, does it?

Then I got a Facebook Message from La Source. "We have a bus going now!"

I rushed back to La Source. The lot was still desolate. 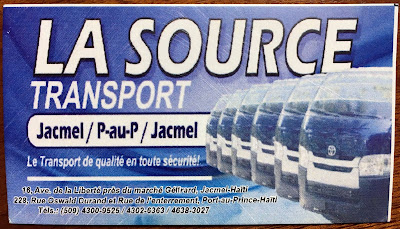 "Non," said the La Source employee, the same one I'd spoken with before. Exasperated, I sat down and refused to move. (This always works, but you if you decide to try it, you might need to be patient.) Finally, he called the owner and put the phone to my ear. "Wout la bloké. There are no buses today due to the roadblock." The Facebook message had simply been a mistake made by an uninformed employee.

I took my stuff back to the hotel, left it behind the desk, and went to sit outside the coffee shop until it opened.

It never opened. George, who owns the hotel I'm staying in, explained why to me later. Sometimes people did not open their businesses during protests, in case of vandalism.

Michel, meanwhile, was still running his business from the bench in front of the Florita.

"There are two Canadians with a car. They asked me to take them to a vodou ceremony tonight. You'll be here anyway. Let me introduce you, so you can come along."

That sounded alien and terrifying, and yet...that's what I was here for, to see what Haiti is about, and it's not like I had other pressing plans. I introduced myself to the Canadians—actually, one Canadian and one Brooklynite—and invited myself along for the vodou ceremony. I told Michel I'd give him twenty bucks for guiding me, and he was more than happy with that, though he said I would also have to contribute funds for a giant bottle of rum.

I checked back into my room, headed upstairs, and started working. Haiti was basically closed today, but it was Monday in Burbank. Might as well get some work done while the wout was bloké.
Posted by Marie Javins at 1:00 PM

Given the tension of the protests, it's not surprising that things would close down like that.