The (Improvised) Artsy Tour of Port-Au-Prince

Getting off a tiny private plane was a little different from getting off a commercial airliner in Port-Au-Prince. For one thing, I had to pay on arrival. I was taken by golf cart to a separate terminal from the main arrivals one, where a friendly missionary office worker ran my credit card and then ushered me out to the curb outside the terminal.

Another difference was only one taxi driver lackadaisically asked if I needed a ride. I’m sure things are different when an entire plane arrives, plus I was at the domestic terminal, but I was startled by how low-key my arrival was. 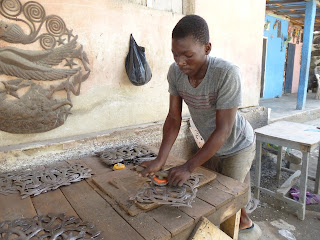 My driver, the one I’d confirmed just last night, was nowhere to be found. I sat down to wait. After a minute, I dug out my phone to text him.

I spent the next five minutes wandering around, my phone held high to the sky. I was just about to beg an airline check-in desk for the password to their wifi connection when my cellular signal suddenly clicked in. I texted my driver. “I am coming,” he said. He was the same driver who’d taken me to the bus depot last Saturday, the last day Haiti had normal working hours. 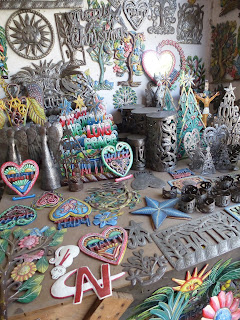 He had been confused about my arrival time, but he showed up within 20 minutes. Driving in PAP today was easy. The streets were still nearly deserted as a result of Haiti’s general strike.

As we drove from the airport to La Lorraine Hotel in Petionville, the driver told me stories of his other clients. Everyone was stuck somewhere, sending him updates. He handed me his phone and asked me to text a tourist in Cap-Haitien about my private plane solution, so I gamely did so.

We quickly arrived in Petionville, though we had to pass a bad car accident on the way.

At La Lorraine, a different driver and guide were there waiting for me, their car full of touristy treats like a straw hat, a coconut, and a Haiti keychain. I'd booked two day tours with a travel agency, but obviously nothing had worked out, so we were improvising based on whatever was open. I wasn't even sure we had any business being out on the streets, but they didn't seem worried so I checked in, left my luggage, and raced down to their car. I cleared the sedan’s back seat of the souvenirs (What am I going to do with those?), hopped in, and off we went. 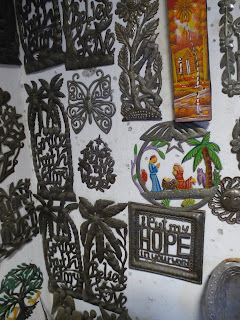 Our first stop was a bakery in Petionville. We then headed to Croix-de-Bouquets, hometown of Wyclef Jean, though that is not why we went there. We were going to Croix-de-Bouquets to see the small village of Noailles, where the entire town is dedicated to turning iron into artwork.

The outskirts of the town had ornate iron fencing—and so did everything else there. We stopped outside a u-shaped collection of small workshops, serenaded by the clank-clank-clank of hammers as artists worked their iron into shapes of animals, crosses, people, letters, trees, and aquatic creatures.

I wandered through all the workshops out of politeness—in truth, I could only carry so much, and there was just no way to get the giant pieces home, much as I wanted them on my wall.

The selling was easygoing, but I was the only tourist visiting at the moment, so I did become uncomfortable after a while. I felt guilty—I bought small pieces at three separate shops and then it was time to go. I knew I’d maxxed out on what I could reasonably carry.

We split and headed to a crafts cooperative on a dirt road, but it was closed. We drove back to town, pass ranks of motorcycle taxis, far more than usually would sit idle. A lot of Haitians were home, uncertain of what would come next in the protests. 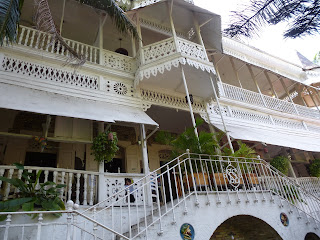 “Next, we will have lunch at a vodou hotel,” said the guide. What on earth did that mean, I wondered, as we drove back to the center of town.

Oh, Hotel Oloffson. Graham Greene had placed The Comedians here. "Oh, The Comedians hotel," I said to my guide. He had no idea what I was talking about. He’s a lot younger than I am, and our cultural references are from different generations. To him, it's the "vodou hotel" because the owner is a vodou priest.

The vodou priest turned out to be Richard, a 60-year-old white man from Connecticut who studied anthropology at Princeton and used to go to Studio 54 back in its heyday. His initials are RAM, thus the band RAM, headlined by his Haitian wife, a great singer and dancer. They’d recently played at the opening reception of the Haitian art exhibit at Pioneerworks in Brooklyn, and I’d missed it. 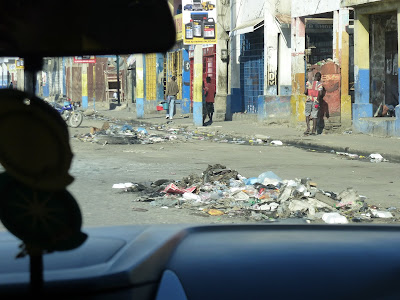 Richard had a droll sense of humor and we hit it off immediately. He showed me all over the property, walking me past the rooms named for the famous people who had stayed in them, and giving me the history of all the remarkable paintings in the lobby.

The guide and I had lunch and then headed to the car.

“That impromptu tour…” I said to the guide. “That doesn’t usually happen, does it?” 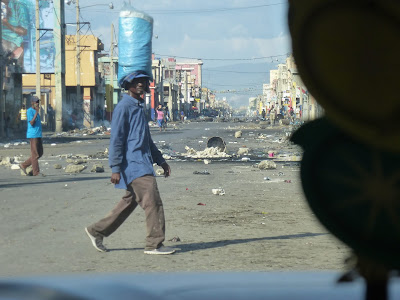 We headed downtown to Atis Rezistans—which is reputedly some of the most amazing art on the island, just a few blocks from the La Source bus dept (still closed up tight). But the streets were blocked with homemade roadblocks, some still smoldering. “We need to leave. Right now,” the driver said. He and the guide seemed slightly panicked, and I understood why. You never want to be the dumb tourists wandering around the front lines of a protest saying “Where is the art gallery? Does anyone know where the art gallery is?”

The guide was at a loss since everything he’d wanted to show me was closed. I asked him to take me to El Saieh Gallery, which I’d read about online. He’d never heard of it until I’d just asked Richard about it, so my guide resisted until finally he got sick of my requests and took us there. 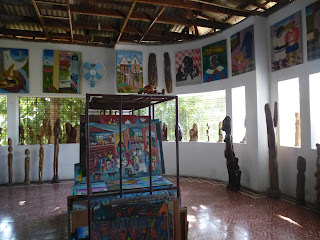 The guide and driver wouldn’t listen to my directions I got off Google Maps, and they asked bystanders until we found the gallery, up a steep hill at a dead end on a rough road.

But we ran into the caretaker, who went in and asked the owner if we could visit. She let us in, and she too was friendly and chatty. I had a great conversation with her, like the one I’d had with Richard. Like the talks I’d had with George back in Jacmel. I was really enjoying how quickly I’d gotten my feet under me in Haiti, but I was sad I’d have to leave tomorrow.

El Saieh Gallery is a large hillside house full of incredible art. I bought some. I’d have bought more if I hadn’t had a guide walking around almost on top of me the whole time. I didn’t want to spend frivolous and shocking amounts of money in front of him. 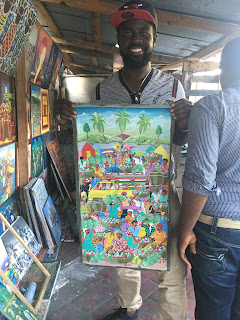 We stopped at one last place on the way back to the hotel in Petionville, a street corner full of paintings. I picked up one last painting for $40. Could I have gotten it for less? Of course. People were desperate for cash as the banks were closed and all business had ceased for a week. But that’s not the point. Getting the best deal isn’t the point. A fair economic transaction is the point. That’s the kind of aid I believe in.

I tried to get the guide to take me to buy a vodou flag, but he and the driver were sick of me. They wanted to go home to their families and call it a day.

Next time, I thought.

But then in the morning, at the airport gift shop on my way to my flight, guess what I found? 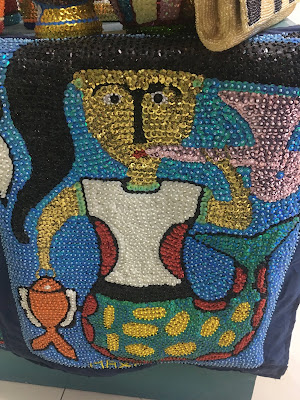 It was an eye opening trip for you.

Would shipping shipping the iron art be prohibitively expensive? It's not very delicate. :)

I don't know...but since there was a general strike and nearly all businesses were closed, I was not able to ship anything.