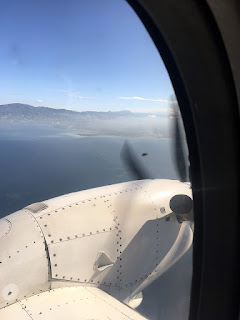 The hotel breakfast started at 7 a.m., when I had to leave for the airport. Leaving was complicated by a different guest who was being dropped off at the bus station, and decided to still be in bed at departure time. I watch wide-eyed as the hotel staff brought down giant bag after giant bag from the budget rooms up the hill. Who could be traveling with so much luggage? (A cruise line employee on his way home, it turned out.)

No problem about missing breakfast, I thought. I’ll eat at the airport. But the airport restaurant was closed at 7:30. To be honest, it didn't look like it had much anyway.

The flight from Cap-Haitien to the Port Au Prince domestic terminal took only half an hour, but the terminal had no food. I'd booked a transfer with a taxi service, Eagle Transfers, in order to avoid running the gauntlet, but the gauntlet turned out to be one man saying "Do you need a taxi?" I didn't, and my driver was there waiting for me, so that chaos of flying into PAP is either exaggerated or only in the international terminal. 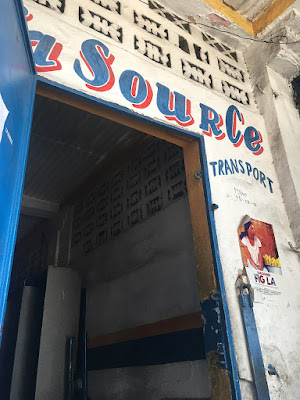 I ended up eating stale cookies from a nearby market. Well, not really eating. More like tasting a few and then asking where the trash was. (It was a cardboard box inside this dark room.) 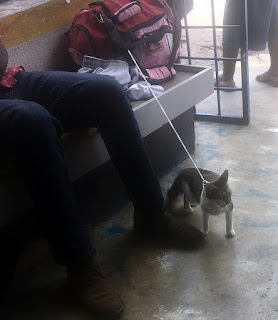 And this is why you want to never go in the road with a coffee habit. And why I always end up eating crap on this kind of trip.

I was a little surprised at the filthiness of the part of town with all the buses. I had read about the rubbish problem but seeing it firsthand is different than reading about it, and it made me never want to buy water in a plastic bottle again. I was timid and didn't run off to the taptap station to find a better options when I arrived at the bus depot and saw the list of passengers was blank. My name was the first one on the list. I had most likely just missed one.

The "hourly" departures are of course not hourly. Buses depart when full. Even the jitneys in Port Authority operate this way. I sat there staring into space and nibbling on stale cookies for two hours. My Kindle app on my iPad is full, but I felt awkward pulling out my iPad. Everyone everywhere has a phone. No one in this circumstance has an iPad. I did read things on my phone a bit, but I was worried about running out of power on the ride to Jacmel. 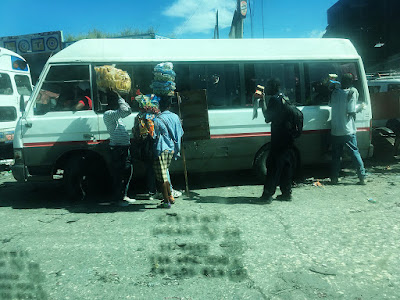 The monotony was finally broken when a passenger showed up with a cat on a string. I guess if you don't have a cat carrier, you have limited options for taking a cat on a bus. Daddy went to go buy the two tickets, one for himself and one for his bag with the cat attached to it, Cat became very worried and meowed loudly until he returned.

After waiting for two hours, the bus showed up. We were all motioned on, and since I'd been the first on the list, I got first choice of seats. And yet somehow, I wasn't allowed the front seat. (Boo.) I think because the guy riding shotgun was a friend of the driver. I chose the driver side second seat—the first doesn't really get enough leg room.

We pulled out, one driver, six passengers, and one cat, heading through PAP toward the mountains, in a dusty bus with plastic sealing up a missing back left window. The radio was on, and as we pulled past streets full of people, motorbikes, and trash, "We Are the World" serenaded us on our way to the mountains.

The ride was hot and dusty and took three hours. In Jacmel, I trudged out of the La Source depot and turned right, down the block. Ten minutes later, I turned onto a pedestrianized historic street with old buildings, most of them crumbling. And there, right across from my brand-new hotel, was a coffee shop. 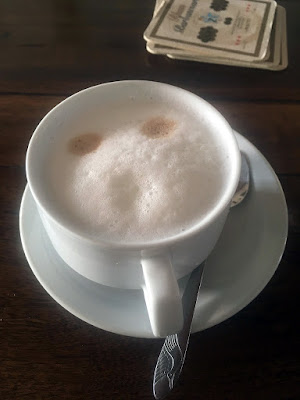