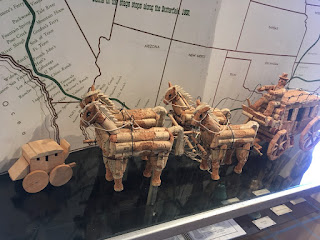 Yesterday, after three-and-a-half years of hearing bus recordings say "Campo de Cahuenga" on approach to the nearby bus stop, I stopped by the tiny Campo de Cahuenga historic site at the Universal metro. It's only open two Saturdays a month from noon-4, so I had to give this a bit of thought.

The adobe structure inside the gated parking lot carve-out is a 1950 replica, the original having been demolished fifty years prior. But there are excavations--you don't need to go in to see them, as you can see them anytime from the metro north-side escalators. Actually, even those are replicas. The originals were reburied for preservation. Supposedly the Treaty, or Capitulation, of Cahuenga was signed here in 1847 on a table (now property of the Natural History Museum) on the porch during a rainstorm. Theoretically, this was the beginning of the end of hostilities between Mexico and the United States, eventually giving rise to the state of California.

You can try to read the platform tiles at the Universal/Studio City metro. Or you can click here to read about how many details are unclear or lost to legend over time. Some volunteers sat inside the adobe house, and they gave me a handout to read along with a replica of the treaty. So now I have my very own Treaty of Cahuenga. Which is not the worst thing, given I have accepted I am a reluctant but permanent-until-otherwise resident of this fine state of California. (So you can lay off the Jersey jokes.)

A local history enthusiast (last seen leading that tour I took of DTLA old speakeasies) wrote an article about Campo de Cahuenga that dug into the background quite a bit more than the actual site does, and should you choose to visit, I urge you to read up a bit before you go. That said, I'm not sure I'd recommend going out of your way for it, but given how often I transit through this metro station, I was feeling pretty lame about not stopping in to this little patch of historic pasture right in the middle of the city.

Hours, such as they are, are here.

Well, why not stop in at such a place?