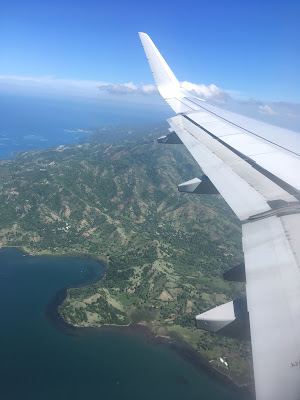 I scrambled for a week to get it together to leave town for my holiday to Haiti. I read the three guidebooks (one a chapter in a Lonely Planet, one a Bradt guide by the same writer as the LP, and one a French guidebook that took me a long time to read since I don't speak French), watched movies, read websites, got my typhoid vaccine updated, got a prescription for Malarone I probably won't even take, and figured out how to squish everything into a small backpack that fits under a standard airplane seat.

"Will you make an out-of-office sign for my door?" I rushed away to catch the bus as I barked back across the office to one of my team. I still missed the #155 bus, and had to wait for the always-erratic Burbank Bus to NoHo metro instead.

I caught the metro to Union Station, got on the LAX Flyaway, and took it to Terminal 6. I can't think of if/when I've been through that terminal before. I almost always fly United because it goes to the Newark hub. But AA goes to all kinds of places in the Americas, and I have plenty of frequent flyer miles, so I used a one-way award to fly from LAX to Cap-Haitien via Miami.

My blow-up neck pillow didn't blow up, so I bought a regular neck pillow for some exorbitant price, knowing I'd ditch it in Miami. But still, even with all the extra costs, no amount of splurging would put me anywhere near the price of a guided tour. No matter how I cut it, even with local guides and expensive hotels, I'd be spending way, way less than I would with $3k trip with Gap Adventures, or G Adventures as they now call themselves. Plus, their trip didn't start until a day after mine ended, and the holiday season is hard enough without being out the first week of it.

My best-laid plans of traveling with a carry-on went awry when all the overhead bins filled up before the flight was half-boarded. Seriously? This is what it's like to travel without status? No one everyone is always pissed off.

"Will this fit under the seat?" I asked the desk clerk.

"Maybe. If it doesn't, it's too late to check it, and then it'll go on the next flight."

"I have a connecting flight. It can't go late."

Sigh. I checked my bag, boarded the plane, and immediately fell into a deep sleep. Just kidding. Sleeping on planes always sucks. But I was able to have a leisurely, kinda gross airport breakfast in Miami, and got my nails done. That was a first for me, airport manicure.

Airpot manicure and final flat white for the near future acquired, I filled my water bottle and headed to the jetway. (Three Maries in a row at the airport Starbucks had me concerned, but it all worked out.)

My flight experience with passenger jets is being up in the air for an hour, not more than that.