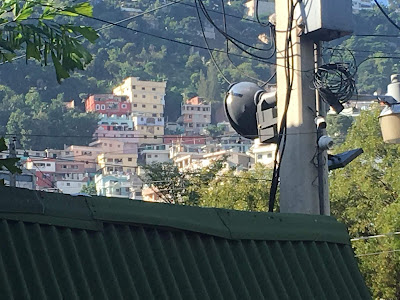 I woke up at 6, had a quick shower that never really got warm, enjoyed a good breakfast at La Lorraine, and headed to the Port-Au-Prince Airport international terminal. In addition to my small backpack, I was carrying a paper maché chicken along with a horse head, three iron wall decorations, and four paintings among my souvenirs.

As the flight took off from Port-Au-Prince, I reflected on my incredible week, and how Haiti's general strike had altered my plans. As the protests and work stoppages had led to roadblocks, I'd lost my itinerary a day at a time, eventually going from four days in PAP to a little less than 24 hours, with most of the city shuttered.

And yet my singular experience had likely been made better for having to wing it. This week in Haiti—no, less than a single week—had been one of those rare trips, the kind we seek out year after year, holiday after holiday, where our goal is human interactions of the sort you can't get at a theme park. Well, maybe you can, if someone in a dog outfit is tasked with repairing plumbing and asks you to hold their wrench. But it's unlikely.

Haiti has few enough tourists that Haitians do not appear to be sick of us. They are not jaded by our selfish requests and attempts to interact for our own satisfaction. We tourists are still individuals here, treated with far fewer clichéd expectations than in many destinations. Heck, I'm not even sure Haiti is a destination. That's something you say in glossy travel magazines. Haiti is a place. A destination is something involving a lot more infrastructure and many more ways to spend your tourist dollars.

And yet, the exquisitely human interactions my delays had led to were in no way good for the country itself. One day of protests had been planned, and this had so far led to five days of paralysis. I felt guilty for having enjoyed my trip. Ten Haitians had died, according to news reports. One tourist had been shot by bandits on a road near a resort. And here I was, thrilled by the minor interactions with artists and schoolchildren.

I do not believe there is an inherent difference between a tourist and a traveler. I believe the difference is merely one's opinion of one's actions--people say "I'm a traveler" because they are embarrassed to admit how frivolous planned adventures really are. I am unabashedly frivolous in a way, as I carefully spend money purely in service of my own need for adventure. The people I visit with likely think me quite mad, and I am reminded of a Namibian travel executive I met who rolled his eyes and suggested tourist dollars might be better spend in a hundred different ways. He's not wrong, of course, but possessions aren't all that special either, so maybe there are only 99 different ways. Later, I'd count every cent I'd spent on the trip—including vaccines, guidebooks, the private plane, the booze for the vodou ceremony, every coffee downed in airports, the malaria meds I'd decided not to take—and learn my careful spending still added up to $2,800 for my week away from home. If that's not frivolous, I don't know what is.

But I wouldn't trade this past week. Well, I would, but the offer would have to be pretty damn good, because this had been one of those rare trips where pretty much everything had been fascinating, and I'd been alone the whole time without once being circumstantially isolated from those around me.

Less than an hour into my flight, I looked down and saw Cap-Haitien. That seemed like so long ago now! But today was Thursday and I'd taken that photo the previous Saturday morning.

An hour later, I saw Florida beneath me. We landed in Ft. Lauderdale, where I met a friend for a Thanksgiving BLT at a hotel restaurant. Later, I put on my socks for my connecting flight into winter, and by evening, I was at my mother's house near Washington DC, contemplating the nature of life and paper maché chickens. 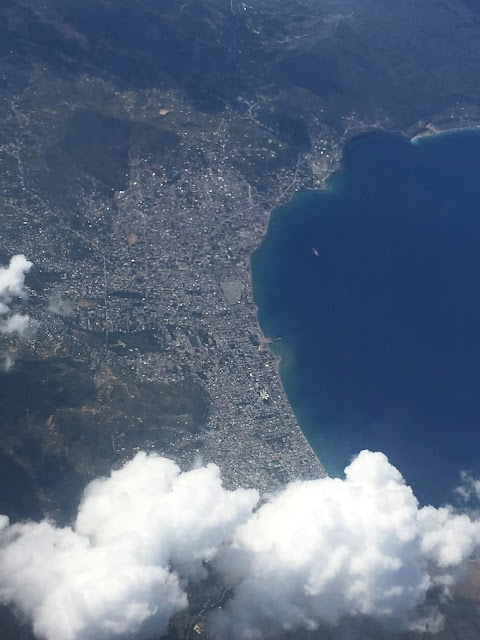 It is an experience that's always going to stay with you.