I packed, but I didn't bother taking my bag to the bus depot. I didn't even take them out of my room this time.

I walked up the street, away from the Jacmel historic district. The farther you walk from Rue du Commerce, the most typical the city looks, with rubbish on the roads and traffic and chickens and motorbikes. The walk up to La Source takes about ten minutes. 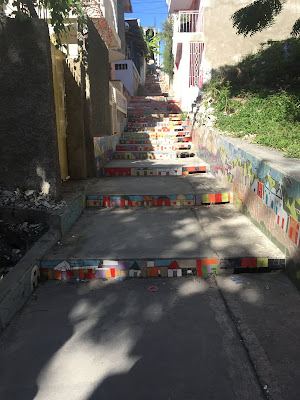 The depot gate was shut. I pushed it opened and barged in.

"The road is still closed. We do not know when it will open again."

I wasn't surprised. I'd seen a lot of policemen at the staging area, in front of town headquarters. They had on what I can best describe as riot gear, and they'd go off north up the road in trucks. Were they going to the road block? To some kind of checkpoint? I don't know.

I walked back toward my hotel, and as I crossed the river, I was greeted.

The man greeting me had been one of the few with an open shop on Sunday during the initial protests. He was carrying a sack of groceries, but he adjusted them and shook my hand.

"Wout la bloké," I said ruefully. He laughed. I laughed. What else could was there?

"Good luck," he said, as I continued on my way.

I went up to my room and called Mission Aviation Fellowship. Yesterday, they'd been ready to fly over and get me, when I'd still thought $274 was too much for a flight. They were busy today and couldn't make it until tomorrow at 8:30 a.m. Did I want the flight?

"Do you take Visa?" Yes, they did. I booked the flight.

I then called Jacqui, a travel agent in PAP who knows everything. She could get me out for $400 (for a slightly larger plane). I thanked her and got a motorcycle taxi to the airport.

"Are there flights to Port-Au-Prince?" I asked the security guard.

He texted a private pilot, who said he could come get me right away for $274. That was the going rate, then.

"Does he take credit cards?"

Another text was sent. No, he did not. 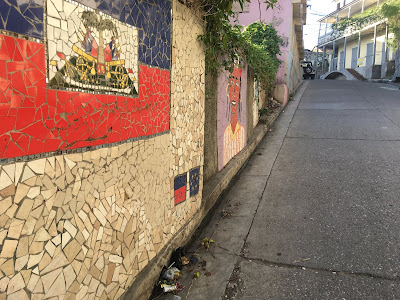 I had exactly $280 left. I could fly today, though I'd already called the hotel in PAP and pushed back my arrival another day. I'd already told the PAP travel agent I would not be there for today's Haitian food tour. What if the banks were closed when I arrived in PAP and I couldn't find a working ATM?

I decided to go tomorrow with the missionaries. Visa made all the difference.

I headed back to town, hungry by now. I'd eaten everywhere interesting and open downtown. So few places had opened their doors given the lack of customers. It was 86 degrees out and seventy gazillion percent humidity, and a guy who wanted to show me his art had attached himself to me, and I was planning to eat at Colin's Hotel, but then a protest headed down the block, right at me.

"Marie, you need to get inside."

Michel the guide was standing on the street, listening to a radio. He'd made me laugh earlier, when he'd told me the US would never win if it invaded Haiti "Because we have magic."

"I know, I know. It's time to go." I ducked into Florita, where all they had was spaghetti and a Coke. So that's what I ordered.

I started getting aches and pains shortly thereafter.

And in the "more things change, the more they stay the same" department...

No, I didn't end up with malaria. Or even a hot flash.

I got food poisoning.

Fortunely, it only lasted a single night.
Posted by Marie Javins at 9:00 PM

Food poisoning- quite a way to end a trip.