The Good, the Bad, and the Somewhat Unpleasant 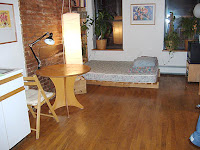 My month back in the neighborhood I lived in from 1993-2001 is over, and I'm headed to Europe tonight out of JFK. Alphabet City had changed somewhat, but not entirely. I am not sure yet if I will go back to Home Area #1 (Jersey City) or Home Area #2 (Alphabet City) when I get back in April.

What was good and bad about living in the City?

GOOD:
-The convenience. In 10-20 minutes, I could be anywhere below 59th Street. I went out more, because there was no commute. 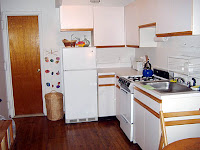 -Take-out. Restaurants are NOT cheap anymore in Alphabet City. But lunch specials rule! You can get an entire platter of Ethiopian, Italian, or Thai cuisine for less than $7 and have enough left for dinner. (The cheapskate in me adores eating well for $3.50 a meal.) My favorite was Le Gamin, the French place down the street which sadly did not have lunch specials, but it was good for a splurge.
-The quirky events. I was a lot more willing to check out something unknown when it was right down the street.

BAD:
-There were these vents in the bathroom that opened into the bathroom next door. Eww. And I could hear people talking on the phone through the walls, and when we all had colds a few weeks ago, it was a disturbing cacophony of coughing from all sides.
-I know I was living in the old ragpicker's neighborhood, but the garbage sifters are just ridiculous in New York. What did they think they would find in my rubbish? Damp coffee grinds and used tampons? No, they were looking for anything of value or bottles and cans for the deposit. Course, I walk all my cans and bottles down to the litter bin on the corner so they can be seen and reached easily, so their efforts were wasted.
-The drunks. The locals Take-Back-the-Streets during the week, but on weekends, the drunk masses laugh their way down the block, screeching TAXI at 4 in the morning when the bars close. Even being on a 4th floor walkup does not block out the sounds of the marauding drunks.
-The stove burners had two settings—OFF and HIGH. No wonder there were so many take-out menus. 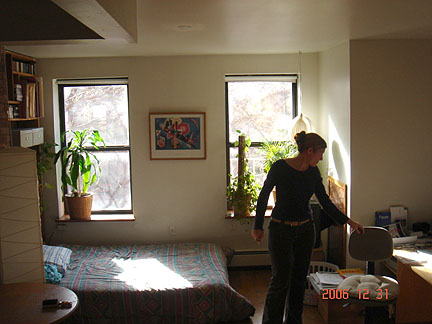 It was nice to live in the thick of things for a few weeks. But I don't know that I'd give up space and a Victorian for a tiny box in Manhattan. Still, I was eyeballing an apartment for sale a few blocks away, but the monthly maintenance costs are outragous. I emailed the agent and he said that the price was already lowered once (Real estate never goes down). I doubt it will be there in April. It's a much nicer place than others in the area, and the new price is not terribly obscene by New York standards.

I'm in the Newark Airport Hilton now, after a Peruvian dinner with Roberta and Michael Kraiger last night. I'm racing through my (hopefully) last-ever coloring assignment, so I can then drive to my garage and pack properly for Barcelona and Cairo. I guess I'll be changing the blog title tomorrow. For now, Marie in Alphabet City is a thing of the past.
Posted by Marie Javins at 8:19 AM

Forgot to mention: I'm in the Hilton because of Priceline. One day I'll explain how it works for people who don't know.

Say hello to the Sphinx for me!

Good luck on your travels!

I miss you already, and still, since I never got to see you in-country! Boo-hoo. Happy travels!

Thanks guys. Guess what? The wheelie bag and I are NOT friends. It's really inconvenient. I feel like I suddenly am in a wheelchair. But I am quite fond of the little matching carry-on bag. Somehow, I managed to get the things that needed doing done, and I ended up throwing everything I didn't need in the trunk of my car, then putting the car in the garage. Not tidy, but it worked.

Time to head out. Guess I'll go put my toothpaste and Chapstick in a Ziploc baggie then.