I was jetlagged on arrival in my Raval flat, but I needed to go to stay up longer before collapsing into bed, in order to get myself onto the right time zone. Plus tomorrow was Sunday—not the best day for shopping in Europe—and I needed groceries.

I grabbed one of the two sets of "identical" keys to the flat (one for me and one for my invisible boyfriend) and headed out. Right, I remember now. This key locks the door, then I hit the light switch for enough light to run down the stairs before the timer cuts the lights off again.

As the outside door shut behind me, a little voice in the back of my head said: Why didn't you check to make sure the key worked before you let that door slam? Then the wishful part of my brain reprimanded the cautious part. Of course the key works. Don't be silly.

I bought some supplies at the little supermarket across the plaza, and what do you think happened when I got back and tried my keys in the outside door?

You're right. Nothing happened. The outside key didn't work. I panicked for a moment—would I have to call Maria again? Then I looked at the outside stairs.

A large metal set of stairs outside the front door led to the second story. Apparently the entryway was being renovated soon and we were supposed to use the external stairs when this happened.

Was there a door at the top of the stairs? From the ground, it just looked like an open window. I'd investigate.

It was an open window. I pushed my groceries inside, then climbed in behind them.

The others set of keys worked, which was a relief. I'd hate to have to climb in and out of the window all week. 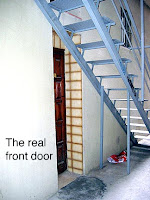 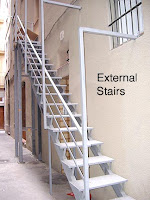 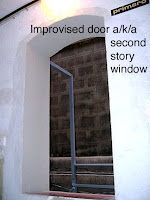 We have the same light timer thingies here. And my laundry is in the basement. Only one flight, but the downstairs switch is broken. So, if I do laundry at night, I have to walk up in the dark.

By the way, we tested Skype with my girlfriend using dial up here and it works great. Woo hoo!