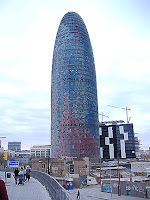 In 2004, I lived up in the chi-chi part of town for a month before fleeing doormen and upscale living to Raval, a place more my speed. Herr Marlboro came to visit then, and he became obsessed with this building, which he called “the egg.”

That’s not how I would describe this building. Was it a language difficulty? (H.M. spoke German as a first language.) No, everyone knows the English word for what this building should be nicknamed. But H.M. was bizarrely polite and old-fashioned in some ways. 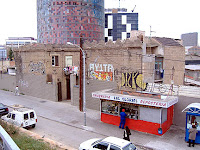 Me, I was a little more interested in what was down the street from the building. A churros stand! Yummy. Those are like doughnuts, but instead of being round, they are long and straight, like “the egg.” In New York, guys sell churros from wheeled carts at Union Square subway station.
Posted by Marie Javins at 6:11 AM

Never mind what it looks like -- that's pretty obvious -- but what is it? Apartment building? Alien beehive? The entire Catalan space program?

It's an office building! It looks permanently unfinished because these orange blinds are always part opened or closed. They're supposed to shade it from the sun, and make it more environmentally friendly.

I don't know how many businesses have taken up residence. It's a new building--it was still under construction when we were here the first time. But I dunno... not sure I'd want my business in there. It's just... weird. Though it's across the street from a nice trolley and from Carrefour. That's got to count for something. Do your grocery shopping after work, I guess.

Here's an article about the building.

On a completely different topic, I just ate some amazing chocolate and now I seem to be flying.

I guess the Spaniards like their Phallic imagery. A churro is, after all, just a penis-shaped donut.

Whets the appetite, no?