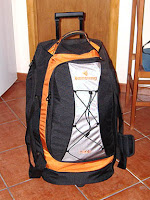 I guess I should admit it—it wasn't the wheelie bag's fault that I hated or broke it.

It was that I am carrying way too much crap for my two-month stay in Cairo. The external work hard drive, the Arabic language book, clothing suited for an office—it all barely fit in my new wheeled duffel. And lowering that down the five ancient flights of broken stairs in my Raval apartment building was painful, though its svelte(r) profile WAS easier to manage than a boxy suitcase.

I reckon I was clever about it. I packed and dragged the bag to the airport last night, stored it in a locker, and reclaimed it this morning along with my carry-on. This way I only had one bag to manage, and was able to do it when the trains were open.

This morning, at 4:30, I threw what was left in the carry-on and trekked up to the stop for the Night Bus. Should I walk through El Raval and Las Ramblas or take the long way around up the safe streets? The old city has its share of thieves and muggers at night, looking to prey on the drunk. And I was carrying two passports, a laptop, an iPod, several hundred dollars, a digital camera, and a copy of Stalking the Wild Dik-Dik. Maybe they wouldn't be so keen on the latter but the rest would make quite a haul.

I walked the long way.

Alitalia took me out of Barcelona, via Milan. Cairo awaits. Here's a dirty little secret I should not admit in public. (My apologies to those who love it.)

I don't even like Cairo. Its traffic, pollution, and touts are annoying. I've been grabbed and (attemped)hustled by men there more than anywhere in the world. And here I go, off to live there. Oh, joy.
Posted by Marie Javins at 3:41 AM

I seem to be here. I guess I'm supposed to have a sense of excitement. But I'm mostly just tired and not looking forward to digging around for a place to live.

I got a new phone number, a MobiNil SIM. But I can't figure out how anyone dials me from abroad.

Thanks Anonymous. Does not work as written, nor do I have an 012 number. Helpful, no?

Your colleagues will figure this one, quick-sharp, i bet!

I noted that they didn't do any serious stairs tests.