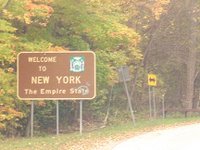 "You didn't sleep through the best part, did you?" asked the conductor as he passed my seat.

"Um… was that the best part?" I didn't want to seem jaded as I realized the scenery was spectacular, but the rainy day had lessened the effect the landscape produced.

He frowned. "That was it! Did you see the lake on the left and the foothills of the Adirondacks on the right? From Port Kent to Whitehall?"

"Yes, they were lovely." I smiled weakly. Lake Champlain separated New York state from Vermont, and the colors were surely vibrant and stunning when bathed in bright sunlight.

The conductor went on to enthusiastically explain our pace.

"We slow down between Westport and Port Henry because we follow the curve of the lake."

I'd had a half a day of gray yesterday, and it seemed we were due for an entire day of gray today. I'd have to go out in my car or on the Metro North later if I wanted scenery shots.

I canvassed the café car, looking for people who were stunned by the foliage. They were, but they were mostly somewhat dazed from the long ride. The train had been held up an hour and a half at the border.

I talked to people and stared at scenery. When darkness fell, I answered emails and did 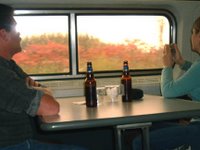 my comic book work. I'd freeloaded briefly on a wi-fi signal at Westport, and raced up into the terminal at Albany to use the open signal there.

"Why do all these people keep asking me if there's wi-fi on the train?" asked the café car attendant.

"Because they have it in Europe," I responded.

"There they go again, making us look bad."

But at least Amtrak had power points by each seat. I was able to recharge my cell phone and my laptop without getting up.

As we cruised through the dark into the Hudson Valley, I checked my email on my phone.

"Lots of excitement in New York," wrote Yancey from San Francisco. There had a been a small plane accident on the Upper East Side.

"Is transportation disrupted?" I texted back.

He was right. From San Francisco, Yancey told me it was all right to continue on into New York City. Then Babc0ck texted me that it was pouring rain.

At Penn Station, I caught the "E" to World Trade Center, where I changed to the 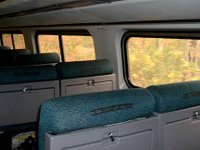 PATH to Grove Street. I caught a taxi home. Someone had spilled half a bucket of gray paint onto the sidewalk and not cleaned it up. No one had touched the circulars that piled up on the stoop over the 36 hours I'd been gone. Maybe there will be a message from my realtor, I thought. Maybe it won't be my problem soon.

I was exhausted, but still had to put everything I'd had with me in the bedbug hotel into a plastic bag. I stuffed it in the freezer overnight, took a long bath to drown any strays, and collapsed into bed. I'd wash everything in the morning.
Posted by Marie Javins at 5:40 AM

This has absolutely nothing to do with trains, but I still am amazed by the things I stumble over in NYC. I was going to Mid-Manhattan library today, and just came upon a block full of stores dedicated to buttons. Some beads. Mostly buttons.

Absolutely do the button story. Someone has to get to the bottom of the conspiracy.

I'm not kidding. Yesterday I was in a rush while ironing my only clean shirt, and just as I glanced up at the clock the iron went right between two buttons. One of them popped off and rolled under the fridge. As a result, I was late for my appointment and tense.

Probably there's a reference to this sort of thing in the Warren commission's report, but I only have the expurgated version. When will we ever get the full story?

This could be my leap into the big time. National Geographic, get your photographers ready! Bring a macro lens.