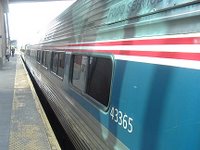 We hurtled past a southbound Metro North train, purposefully carrying its occupants to work as my Amtrak train raced northward out of the City's granite cut and under the George Washington Bridge.

"When does it get pretty?" A hefty man in socks was talking to the conductor. Out the window, I spotted two men fishing in the Hudson. Then we went back into darkness.

"It's pretty all along. You're on the best side."

Note to self: Always be on west side when taking the train north along the Hudson.

I didn't get a window seat. This wasn't surprising, since I'd boarded the full train with only two minutes to spare.

If the PATH train had been delayed... It was unthinkable. I need to stop cutting things so close.

On we rolled, eventually leaving the scenic Hudson River behind, with its cliffs, hills, and picturesque small towns. We entered a tunnel of bright colors as the trees closed around us, the reds and yellows merging at high speeds. 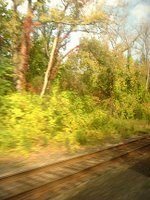 "What's the best part?" I asked the man working in the snack bar.

He motioned at the windowless wall behind him. "How would I know?"

Point taken, I asked the conductor instead.

"You've just sat through the best part," he explained. "North of here, the leaves fell early this year."

I talked to my neighbor, who had once worked at Macy's.

"They have a jail in Macy's basement, for shoplifters."

And I talked to two older Australian women. They were cousins, one from Sydney and one from the Gold Coast.

"Are you single? We're both single. Neither of us ever married. There are a lot of advantages to it. You are very lucky."

There's something so very civilized about traveling by train. It creates a spirit of camaraderie. In the dining car, a small group offered me different names for leaf colors.

The conductor, it turned out, had been right, and eventually we were speeding along next to bare but unembarrassed trees, standing tall in their nakedness.

We were held up at the border, and crept into Montreal just before 8. Exhausted, I found the ATM, took out $20 Canadian, and caught the subway to a small 3-star hotel I'd booked on Hotwire. Collapsed into bed, having seen only the edge of Montreal's underground shopping center, two subway stops, and the central rail station.

Dang, that getting in late part does worry me, since I'm trying to make plans for dinner that night with a really disparate group of folks.

But you're right about train travel; if I could take a train to the States I would, no matter how long it took.

When are they going to finish that Transatlantic Tunnel, anyway?

Uh oh! You should have continued on to Ottawa, only 2 hours away from Montreal. We've still got leaves here and I know some people who have been looking at them!