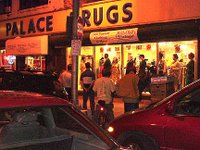 I needed to be doing my freelance on Friday. But because there was an open house coming up in my condo, I dropped everything to paint, caulk, scrub, and clean. (Wasted effort, as it turned out, since only two people attended, though it is nice to have these things finished.)

There were a few minor projects that were literally beyond my reach. Even with my ladder, I could not reach my eleven-foot ceilings. A call to tall-guy Michael Kraiger was in order.

I worried a bit, because Kraiger had wiped out on his bicycle a few days ago. I'm sure he's got a broken rib (knowing a thing or two about cracked ribs and bodily damage myself) so he shouldn't have been reaching up to my ceiling fan. But he seemed to take it well and didn't look to be in pain. I was probably suffering more from my caulking experience than he was from his damaged rib.

Ceiling fan dusted, we headed over to La Conguita, a cheap and excellent Cuban restaurant near Grove Street, for some chicken, rice, beans, and plantains. I love La Conguita because this meal, which includes bread and a paper placemat that features a map of New Jersey, costs only $5.50. Though for the life of me, I cannot ever seem to get there in time for the Friday night special ropa vieja.

"Roberta said there was some kind of art happening tonight. You know anything about that?" I asked as Kraiger doused his rice in picante sauce.

"Yeah, there's lots of shows but what I really need to do is go home and draw trading cards."

I pondered my own rice before he passed over the picante.

"Me too. Not trading cards, I mean. Donald Duck. All the Donald Duck I didn't color today."

We agreed--no Friday night art for us.

I walked Kraiger down Newark Avenue to the corner where he could catch the private shuttle bus up to his home in the Heights. Then, "What's that?"

The Newark Avenue pharmacy didn't seem to be a pharmacy anymore. There was talking, someone speaking through a microphone, and a crowd was gathered. 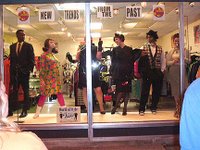 wear. The shop's owner, complete with a beehive and 50s dress, narrated the scene. Every passerby had stopped, including old men from the Puerto Rican-flagged bar on the corner, teenagers, young trendy rich kids, and grandmas. Even the counter guy from the falafel shop pulled up on his bike and didn't move until the show was over.

I agreed. Though when I look at the new people moving into my building and neighborhood, I do worry that JC's gone too far, and that we're losing our diversity as the rich push out the poor. But as I'm being given a gentle prod and shown the door myself, maybe that's just sour grapes.
Posted by Marie Javins at 5:51 AM

When I lived in New York, I never found my way around enough to find food that was both good *and* cheap. I could find one, but not the other. Wish I'd known to ask you... good Cuban food for $6 a plate? That's amazing!

And now I'm craving Cuban food, so I might have to hit Habana's here in Austin next week.