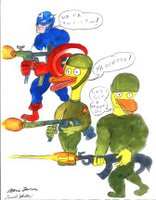 Jeff reminded me of a drawing session I did with musician Daniel Johnston. I'm not sure what year it was. I think it was the late 90s. Daniel had been in New York to play some shows. I took him up to Marvel Comics--he loves comics--and he'd been inspired to draw. (Which is not unusual since he always loves to draw.)

"I'll come to your place and we'll draw all afternoon!"

True to his word, he did. I asked a few friends to drop by--a letterer (Jon Babc0ck), and an editor/artist (Mark Powers). 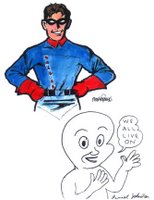 We drew for a while, and then went around the corner to eat at Old Devil Moon.

I didn't notice but later the other guys said they'd thought Daniel had been going to stab me with a fork. He wouldn't, of course, he was just thinking with his fork suspended in mid-air. Sometimes he does that--not with the fork, I mean, but he just stops and stares off into space and thinks for a while.

We might have to sell the Captain America and his Duck Army art to help pay for my building's new roof. Damn this roof.
Posted by Marie Javins at 6:37 AM