On Admiring An Ex

I don't know what became of my ex, Turbo. He's presumably happy in Oz with his new girlfriend. Turbo and I didn't really work due to our differences over rural versus urban living.

Turbo is a good guy all-around. He taught me some important lessons, including a biggie--it can be fun to share your life with another person. I never quit admiring him even after I did not want to live with him anymore. He's a school teacher in a rural community, and he built his own house on 30 acres of rainforest in northern New South Wales. He used to nurse baby kangaroos back to health and that sort of thing. He played Aussie-rules football twice a week and likes to cook and clean house. All that and he was also easy-on-the-eyes. I think he was an astronaut too. Okay, I'm exaggerating.

We did so many fun things together, and I often find myself telling Turbo stories. All my JC friends knew him too and they all laugh with me. I tell of the two of us buying Henry the Ford in California in early 2002, driving three months with our tent and our National Parks Pass, of our detour into Mexico, of his antics with street food and the Copper Canyon bar where men had to check their guns at the door. I tell of him and Yancey trying to outdo each other by eating the most fried bugs in China, or him looking right past me the first time he saw me in a dress (he assumed I was a stranger), and how he nearly killed us both by insisting we drive Henry to Niagara Falls in the middle of January. "Pump, pump!" I yelled as we skidded off the exit ramp. How he liked Budweiser. How he was obsessed with the "Mr. Softee" truck (I can no longer look at Mr. Softee without laughing). How we were robbed in New Zealand, how when the tent decided to leak, it only leaked on my side.

What's my point? I'm not sure. Turbo was cool. He had cojones and loved a challenge. He had no sarcasm or cynicism in his soul (okay, okay, that right there means we were doomed). He geniunely had my own best interests in mind for the entire two years we were together and for a year after that as well. He set the bar high. Does that mean I made a mistake letting Turbo go? No. We didn't work together. But it does mean that I respect him and value his decency.

Turbo was silly, but he was no coward. I hope he's happy. 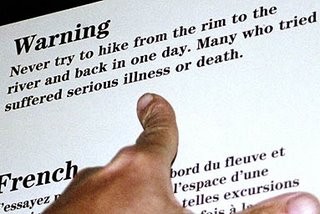 Turbo at the Grand Canyon: "That's a challenge to an Australian!"

Good post! I hope my exs remember me so generously.

I met him once in LA. He was a good guy and I remember that he liked my Barbeque!

Scarf, I don't make a habit of being so generous. Turbo was exceptional. The next one won't get off so easy when I get around to writing Curse of the Hippo.

I was laughing reading it. I have made a similar, more modest though 'admiration post' on my South African ex for introducing me to Africa. It makes it all easier when they are still admirable (which doesn't mean that they were easy though) Pernille

Pernille, I couldn't find it! Can you point the way? My admiration extends to few exs, and it takes many years before I can see the past clearly.

I was also being very discrete ;-)
These are about Ian - he is one of my most frequent readers, so he knows what I am talking about...so, I thought I needed not being too frank. The ex-thing is implicite....

http://pernille.typepad.com/uganda/2006/08/ubuntu.html
Being UBUNTU is one of the greatest honours and he really is...

http://pernille.typepad.com/uganda/2006/09/httpthebobscomi.html. For taking me INTO Africa, even in Copenhagen, which is a good quality when you aren't physically on the continent.

Last time we spoke, we were joking that I would ran out of African countries, if I keep producing ex'es living in them (Because they get too small for me, and I can't go there anymore...) Seems in general I am running out of ex'es about whom I would use the phrase 'admire'. I mean they might be nice, but somehow not this ubuntu style, which seems to be a prerequisite in my choice of man....