Killed by a Coconut 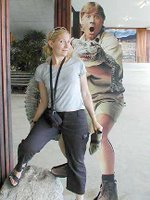 In 2000, I was in a taxi in Ho Chi Minh City. The driver's radio was playing a Shel Silverstein song about people doing all kinds of daring things, having all kinds of plans, then being randomly killed in bizarre accidents in which coconuts fell on their heads.

The Crocodile Hunter had a coconut moment yesterday, and I am sad for Mrs. Crocodile Hunter and their kids. It seems so bizarre and random--stingrays generally hurt a lot when they sting, but don't usually kill people. It was just a chance thing of the barb hitting in a certain way at a certain spot, and seems so weird 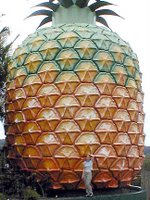 given that Steve Irwin was usually face-to-face with truly dangerous animals like saltwater crocs and poisonous snakes.

Writer Peter Moore's father is the plumber at the Australia Zoo on the Sunshine Coast. He had to go into a croc pit once to fix a leaky tap while Irwin distracted the crocs. When I lived in Oz, Turbo and I went to the Australia Zoo once, though I didn't meet Peter's dad (nor did he get us in free). We also visited the Big Pineapple on the same day, and our car windshield cracked, though not as a result of any pineapple or coconut interaction.
Posted by Marie Javins at 8:12 AM