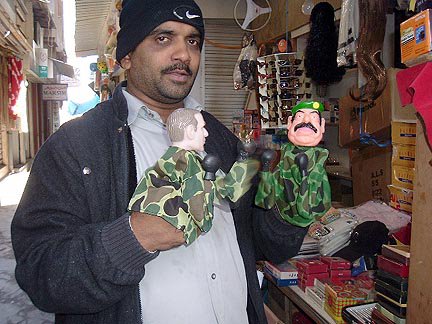 My friend The Professor is in town. I last saw him in March when I took Jazeera Airways from Kuwait to visit him in Bahrain, where he is a teacher and administrator at the New York Institute of Technology, Bahrain campus.

We are going to meet at a 24-hour restaurant that neither of us has been to for 15 years, Around the Clock cafe. For some reason that probably made sense in 1990, we have a running joke that goes "What time does that open?"

Last time I saw The Professor, he picked me up at the Bahrain Airport and then we were promptly rear-ended by three guys from Peshawar. I was in Peshawar once--in 1998, when posting something on the Internet was a very different (and simplistic) beast--but I couldn't tell these guys were from Peshawar. The Professor has a secret method for divining a person's origin simply by looking at them.

Oops, now I'm running late. Blogging can do that.
Posted by Marie Javins at 7:09 AM

What, no IHOP at 3 in the morning Marie?

No way, I like to sleep at 3 in the morning these days. I'm all grown up now. Okay, partially. The part that likes to sleep is all grown up.