Winding Through the Medina 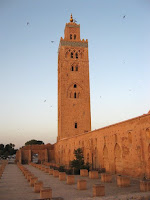 I walked up to a store where artisans carve out unique designs on tiles. One of them showed me how it's done, deftly chopping out a little heart from a tile. He presented it to me with a grin.

I'd sought this store out on purpose. I intend to renovate the bathroom in my (Yancey's) apartment sooner or later, and I thought it would be cool to have small handmade tile accents. Maybe a rhino in the corner. Yancey likes rhinos.

"How much are they?"

I don't remember the artisan's response, but the price was ridiculous. Something like $10 a tile.

"Oh, they are very beautiful, but I really do not have this kind of money. I am on dollars, you see, and the euro is very strong right now, and I really cannot pay... blah blah blah... do you have anything cheaper?"

My bargaining technique works wonderfully when someone is genuinely messing around about the price. At this point they start to negotiate.

He didn't do that. He shrugged. He showed me a few cheap tiles that were pretty basic.

I had similar experiences around the Medina. What the hell? Don't people want to sell?

The intervening years between the last time I was seriously on the road (2005) and now, I realized, have not been kind to the dollar. The euro is worth $1.40. That's a huge difference.

Maybe it's karmic payback for me getting annoyed when Turbo would not want to spend his Aussie dollars when we traveled together. Now I knew what it meant to spent rate-and-a-half for everything.

I asked the man by the fountain, the one I greeted when I walked to and from my guesthouse, where I could get a ceramic tagine pot. He found one and I ended up paying him about $20 for it, way more than I knew it would have cost if I'd picked one up in Fez. And only $5 cheaper than at the Moroccan store near my old apartment on Avenue B.

I traipsed up to an open-air market outside the bus station, right outside the Medina in the new(ish) city. The vendors seemed to have all gone home, so I walked through the new city to the fixed price shop. There, a carpet similar to the one I'd bought for $70 in Marrakesh in the early 90s was $150. I'd seen it in Chelsea for $950, and in the souks for hundreds of dollars. But this was its real value—$150. Fifteen years ago, I'd paid about exactly what it was worth.

I tried to walk back to the Medina, passed the Kasbah, got hopelessly lost, and finally ended up on the busy streets leading up to the main square. A restaurant tout offered me a menu, and I followed him up some stairs to a rooftop restaurant.

Exhausted, I sunk into a cushioned chair. I sipped tea and munched pastilla, mulling over my shopping failures. I'd wanted an entire set of ceramics, which would replace my 1992-era IKEA plates. I had a lot of unused bubble wrap in my bag and was heading to Paris in the morning. 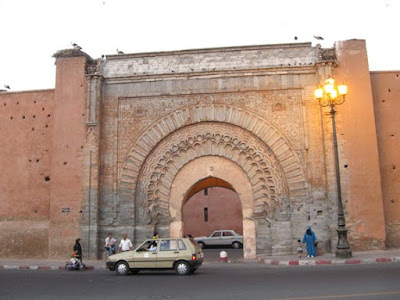 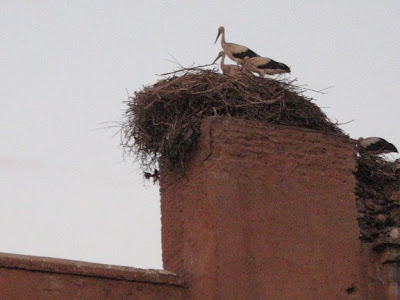