The Road to Fez

"Get your bus ticket out of Chaouen the day before," warned the guidebook. "The buses originate elsewhere and are often full when they arrive at Chaouen."

But it had been late and I hadn't, and didn't want to trek out to the bus station only to find there were no seats to Fez. So walked down the hill to the shared taxi—grand taxi—rank instead.

"Ouezzane?" That's the halfway point. There would be no taxis directly to Fez.

The attendant motioned me into the last seat in a Mercedes. Grand taxis in Morocco are Mercedes sedans. They leave when full, and "full" means four people—fat or thin—crammed into the back and two in the front with the driver. You can buy two places, but not if you are the last one to arrive and five people are waiting to leave.

I was squished between a rural middle-aged woman and a young man in his early twenties. I hate not being able to shift. Last night, I had thought my feet were falling asleep and would never be the same. But they had been fine.

We wound around the Rif mountain roads, up and down, back and forth on the snake-like road. The radio played the news in Arabic, which I didn't understand, so to me it sounded something like this:

About 45 minutes into the one-and-a-quarter hour trip, the woman next to me moved. So we all moved in unison.

She pulled out a plastic grocery bag and started to vomit. Carsickness.

We all looked out the window. I waited for an awful smell.

No smell, but she did barf again. She closed the bag and held it tightly.

A half-hour later, the Mercedes stopped in a dusty lot in Ouezzane. We spilled out, all six of us at once. Riders in grand taxis barely let the car stop before they're scrambling out, because the ride is so uncomfortable. 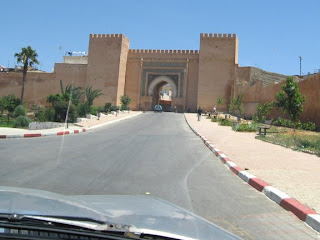 I approached the attendant in the Ouezzane grand taxi lot. There's always one man in charge. You can identify him because he's the man carrying the stack of receipts and paperwork.

He thought a moment, then drew a diagram on the receipt pad. "Ouez," he wrote. Then an arrow to the word "Meknes." Last he wrote the word Fez and drew and arrow between Meknes and Fez. I'd go the long way 'round, Ouezzane to Meknes to Fez.

Off we went to Meknes, overtaking trucks and speeding along the mountain lanes. We passed by Volulibis, ancient Roman ruins near the small town of Moulay Idriss.

"I'll be back," I thought. I considered asking the driver to stop and let me out, but I didn't want to risk being stuck there with my pack, unable to get a lift back to Moulay Idriss.

We descended into Meknes, where the driver motioned me across the street to a new set of taxis. This time, I was first.

"Oui, ca va. Deux places a Fez, s'il vous plais." Twenty dirhams later, I had the front seat to myself as we driver past a tremendous inlaid bab, or gate, and down the road to Fez.

I silently thanked Mademoiselle Evans and her ninth-grade French classes.

But I'm going to need to learn one or the other, French or Arabic, if I'm going to see more of this part of the world. At least to the point here Spanish stops coming out of my mouth. 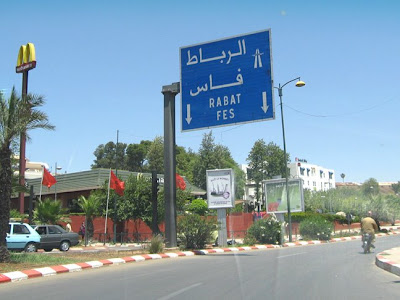