I asked around. A lot. But I never did find the secret, nice, cheap place in Paris.

Every time I did the math, the room that looked so cheap in euros ended up being more than a hundred bucks in dollars.

The exchange rate is a killer.

So in the end, I'd thrown up my hands and used my tried-and-true method. 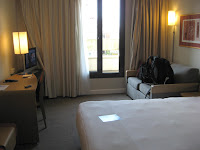 No secret here... mix up Priceline with BiddingforTravel.com and you get something reasonable enough. There are hidden methods on BiddingforTravel when you are looking at New York (bid J.C.) or London (try Heathrow), but nothing turned up for Paris.

And sometimes, when I ask around if anyone knows any great secrets for Paris—besides Priceline—I'd get "Try Priceline!" Uh, okay. More than once, I could swear someone is parroting my own advice back to me, given years ago to a mutual friend. But these aren't state secrets. You can read about them in mainstream travel mags, the kind that crow about "bargains" that are so obscene that I laugh aloud while reading on the PATH train.

I ended up with a $90 Novotel in a non-touristy neighborhood right by a metro stop. It was fine. More than fine. I am happy to stay in a decent place for less than the price of a rundown place.

The only problem, then, was the public transportation in Paris. It's terribly similar to New York's. What that means is that what looks like a simple transfer on the map can turn out to involve long underground hikes.

No big deal, right? I assure you, less nice with a backpack and an armful of souvenirs purchased at the last minute in the airport.

By the time I had to transfer trains, I was fried and too tired to pay attention. Had I gone through turnstiles? Had I not? Where was the token booth? Did I care? (No.)

Nowhere to buy a ticket. I wanted to get off the airport train and get on the metro. I could either keep walking and find the purchase point... or I could go through that open door that the woman with a stroller was holding open.

Guess which one I picked? And then sweated nervously—worrying about ticket checks—through another transfer, all the way to my stop.
Posted by Marie Javins at 8:48 AM

So didja hit Chez Paul, or is that tomorrow's episode?