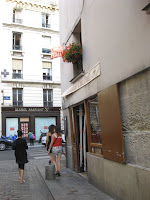 When I unzipped my pack, a mound of dirty clothes, ornate plates, and bubble wrap erupted onto the hotel room bed. There, down at the bottom of the bag, was a black, sleeveless shirt that I'd been culturally unable to wear in Morocco. My only clean shirt. Perfect for Paris.

I showered and then scraped off deodorant onto my only clean shirt. Oops. Okay, back to second-cleanest.

I studied the map on the Chez Paul website—that's where I wanted to go for dinner as it had been recommended separately by Ed Ward and Paula Siry—and then got on the metro. Chez Paul wasn't a tourist hotspot, but it is reasonably well-known. As a single diner going early, maybe I'd get in with no problem. 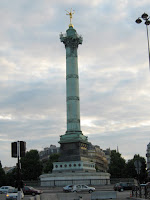 I needn't have worried. I was out for dinner at 7, which is pretty early for a Friday night. There was plenty of room in the small bistro. A heavyset woman in a low-slung black tank-top, purple bra straps, and shiny red shoes motioned me to a table in the back. I seemed to be the only customer she did not personally know, but that didn't stop her from treating me with humor and charm. She greeted others with kisses on both cheeks, then would head over to saw away at the bread. Sometimes, she'd do a little jiggly dance of happiness.

A set of hybrid English-American grandparents came in with their grandson and sat next to me. The grandmother, in French, informed me that they would be speaking English and hoped not to disturb me. We all had a good laugh at my reply, not French in the least, and had a fine chat about the Chez Paul food, which was delicious bistro fare.

I headed down a pedestrian street to the metro, then over to the Eiffel Tower for a few photos. I walked off my Chez Paul steak as I clumsily navigated the traffic circles and diagonal streets of Paris on my way back to the Novotel. 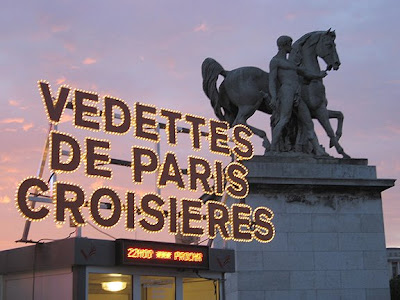 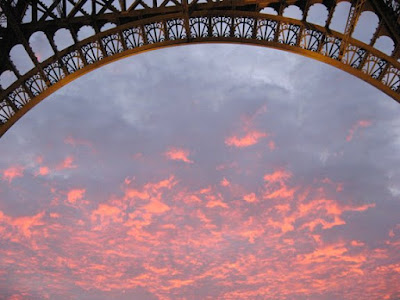 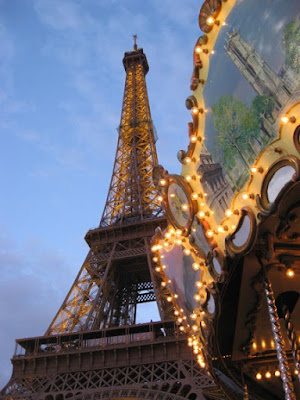 I don't know if pigeons are still a problem under the Eiffel Tower, but when we were there, the tourist beside me got "blessed". Although he was not an English speaker, we were amused by the sudden shreik of "s-h-e-e-e-i-t" he exploded with when he got splattered. Mercifully, we proceeded unscathed.

That lady you met is one of the owners of Chez Paul. Her daughters and my friend Gerard's daughters went to school together, and I won her heart because there was some chewing gum that was very hip with kids in Paris that you could only get in America, so I stopped off in Paris on my way back and presented both sets of kids with copious quantities of the stuff -- enough so they could nonchalantly give it away to other kids.

Her memory is fantastic; I haven't been there in a while, but every time I go she recognizes me. I've walked in, seen a mass of people waiting at the bar, and had her whisper "The wait is not as long as it seems, M. Ward."