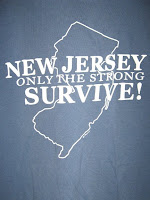 Remember a while back when JC starred as the answer to a question put to John Waters on "Wait, Wait, Don't Tell Me?"

We were described as the most corrupt city in the US. But the examples cited were mostly historic, from the time of Mayor Hague.

We took back the title for the modern era this past week, when Hudson County and JC were all over the news. Money laundering! Bribery! Syrian Jews selling kidneys! Hoboken's newly elected 32-year-old mayor on the take from developers in the parking lot of the Malibu Diner!

Shocking. Not the charges. That the parking problem in Hoboken is so severe that people have to meet at the Malibu Diner—which has its own parking lot, convenient for exchanging money in car trunks—in order to be on the take.

To me, there are multiple issues afoot, some of them practically meaningless and many utterly disconnected from the rest. Why charge a kidney commerce guy at the same time as someone on the take from developers for purposes of financing a campaign? Looks to me like all they have in common is the same informant, and by tying all this up neatly on the same day, there ends up being an unstated illicit connection between the mayor of Hoboken and some guy buying kidneys from Israel.

Which, near as I can tell from the mess of revelations of the past week, there isn't any connection. It's two separate issues, all charged at once to create some kind of massive "SOPRANOS WAS A DOCUMENTARY" headline.

I am laughing as much as every other Hudson County resident. Us Jerseyites have a thick skin when it comes to being embarrassed about our home. We have to. Ben Franklin purportedly made the first Jersey joke and they haven't let up since.

Not only am I laughing, I am perversely proud. Though it shames me that Hoboken took the title of most ridiculous mayor, which we have held since ours 1) released a Christmas CD 2) ended up in cuffs in Bradley Beach 3) was photographed drunk and naked on his front porch. Nevertheless, we historically win that one as we had the mayor who wouldn't step down though he was in jail in '92, and we had Hague, so we cumulatively kick Hoboken's ass all the way back to Frank Sinatra Drive.

I am also like other residents of Hudson County: "Take that! You sold us out to the developers! You sacrificed the wants of your citizens for the deep pockets of developers! I've seen that video where all but two of you gutted the historic Powerhouse District with its ancient warehouses and cobblestone streets in favor of new highrises!"

It's going to be a long time before the entire story makes sense but Syrian Jews aside, many of the charges seem to be penny-ante stuff about campaign finance. This is a complicated national issue which I can't claim to understand, but there are various shades of legality and as long as there are lobbyists and large corporations able to buy votes in our national government, I'm going to find it hard to get upset over a local politician promising favoritism to a developer in exchange for some campaign funds.

Yes, of course this is serious stuff. Yes, of course JC and Hoboken have been sold to the highest-bidders in heinous ways. (Yes, there are good developers too who consider the needs of zoning and the surrounding communities.)

But my point is this.

1) Why now? Does it have anything to do with this Bush-appointed US attorney for the fine state of NJ running against the current governor (who I am ambivalent about, though I know he does not wear his seatbelt), and in fact, hey, look, the new Obama guy comes in soon? And it's a matter of public record that Gonzales did some questionably partisan things as far as replacing United States attorneys.

2) Why is our system so ridiculous that it costs so much to run a campaign? It's not like they were taking money to buy a cool new yacht. It was about campaign finance, for f*ck's sake. I find this a gray, baffling, poisonous topic and I seriously doubt the founding fathers intended for the candidate with the most money to win.

I loved the news coverage this past week and I enjoy a good show. I want JC citizens to finally have a voice and not to feel like the developers always win. I want my local (not-on-the-take) councilman, who seems like a decent guy, to run and win for mayor and to go on to bigger-and-better things. But the idea that it is actually just partisan politics as usual, a witch-hunt dressed up to put on a phenomenal show that involves kidneys and money laundering, when in fact it doesn't, makes me a lot less thrilled with the inherent humor in events on the home front.

Not so funny after all. But the tide is sweeping in along the Hudson River...
Posted by Marie Javins at 1:04 PM

Seem to be a lot of people catching bullets in JC lately. Watch yourself.