Live, Learn, and Check the Wi-Fi Before Paying 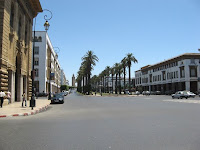 Rabat isn't the hottest tourist destination in Morocco, and so the hotel selection isn't great. The closest hotel to the train station is a tired old place called Balina. The Balina is deluded... it still believes itself grand and worth $65 a night.

Which it certainly is not. Unless you have a thing for ratty and ick.

But I do have a thing for wi-fi, so when I stopped in and asked if they had wi-fi, and they said "yes in the lounge," and then were willing to put me in a room directly above the signal, I agreed to fork over $65 for their room that was probably state-of-the-art in 1958.

I could have had something similar for half the price if I'd walked a few blocks on, but I was also lazy and carrying a big-ass backpack. As usual.

And hour or so later, I was swearing and spitting when I could not get onto the wi-fi. I stomped down to the front desk, where the clerk said:

"Are you using a Macintosh? It doesn't work with Macintosh." 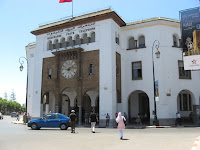 The hotel probably needs to upgrade their firmware. But they weren't likely to do that tonight, if ever.

I opened the windows to the street to try to catch a signal, and was overwhelmed by chanting.

Ah, hell. I was across the street from the main government building. The parliament, senate, or whatever it was. Right there.

And there seemed to be a protest.

There's something familiar about that song... like something you'd sing at camp, or in the car.