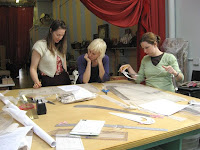 I'm not normally a craftsy person. Though once when a certain ex (circa 1988 or 89)—who went on to bigger and better things involving famous independent films—flew to Texas for the weekend and left me his car, I drove it to Virginia and then built a farm on the dashboard in order to score forgiveness.

It worked, though a few week's later, his friend Jack threw the farm out the window. Or so he said. Who knows. Knowing that particular ex, he probably threw it out himself to avoid explaining to some woman that his girlfriend put it there.

Denise and I are hell-bent on becoming craftsy. We started out of mid-life boredom, but Denise and I both have discovered that we really like "craftsy." Liz did too at the bag class, but she sat this class out cuz she hates skirts. Though her man did escort Denise and I around Brooklyn, looking at Gowanus art studios after our class ended. And he loaned me $20 to buy clothes at the Carroll Gardens flea market. (Note to self: Pay Stuart back the $20 next time you see him.)

Class #1 (of a three-part series) did not involve fabric at all, to our surprise. We spent more than two hours cutting the patterns to fit our particular sizes. Who knew that sizing was so specific? So how is it that I can wear one-size-fits-all? I don't know, but this skirt is going to fit me perfectly. Until the next time I gain weight, anyway.

We discovered that I am taller than Denise, and also have longer legs, a longer torso, and a bigger butt. No surprises, but by the end of the class, both of us were dizzy from calculations and too-much-information. We were glad to meet Stuart at the coffee shop and then wander around the Gowanus art studio tour.

Next Saturday: Class #2. I bet we cut and sew this time, and then deal with zippers and darts in the last class on November 1.
Posted by Marie Javins at 9:16 AM