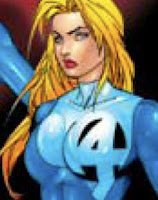 The young woman translator approached me timidly with a printout of a piece of art from a Marvel UK Spider-Man magazine. It was Sue Storm, appearing in a puzzle about the Fantastic Four. We were reprinting it. And it was anatomically impossible.

"I know we can't print this, but I can't face the designers. I don't know how to say it to the guys. Can you help?"

I barged into the design department.

"BREAST POLICE!" I bellowed. "Who let THESE through? Do you want to get us banned in Saudi?"

Four adult Egyptian men (two of which were named Mohamed) reddened and then started giggling.

Some days I love my job.
Posted by Marie Javins at 8:47 PM

Couldn't you make her rack, you know, invisible?

And as the father of a 4-year old Fantastic Four fan, I appreciate your efforts.

Now my three year old Justice League fan would be disappointed. He has told me, you know, he likes the girls! (Particularly Hawk Girl at the moment. Last week it was Super Girl. Wonder Women breaks into the top periodically too.)

I, of course, am very happy to see a little more fabric, a little less.. you know...

Oh there was LOTS of fabric!

That must be some picture ... i've seen em get a lot of B cups through.

Y'all need to run the tape on Sue Storm. Super-heroine or no, I think she probably can't stand up, much like Barbie with her 80-inch, bimbo-toppling bust...

I mean, really, for shame, you illustrators. Leave a little room between clavicle and bellybutton for imagination. Sheesh.

Lieutenant O in the Cairo art department did a great job, carefully copying, pasting, and touching up until Reed Richards arm went in *front* of Sue rather than behind her.