Here's the inside of a Cairo black taxi. 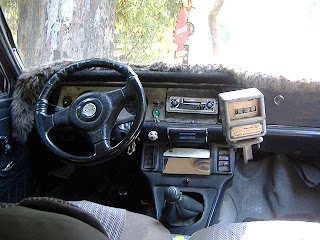 These taxis would be illegal in the States. They'd never pass any safety inspection and certainly would not meet smog standards as they careen around town spewing leaded fumes.

I took a black taxi to Bab Zuweila yesterday. I wish there were some magic key to telling if a driver were competent and honest, but unfortunately, you never know until the ride is over. Are you safely at your destination and did he accept a fair price? Or are you clear across town and is he screaming for more money?

Yesterday's driver took me about three blocks then pulled over to give water to another driver, whose taxi's radiator had burst. He got back in and started fussing with me about what fare I was going to pay him. I told him to pull over--my policy is to get out whenever they start trying to negotiate. Fares are set, by a nebulous zone system. There's no room for negotiation. Unless you're a tourist who doesn't know better. 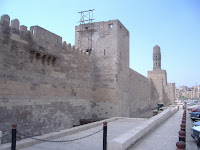 I thought we'd reached a compromise--a too expensive one--and off we went. He took me to some city walls that were halfway to Nasr City and declared "Bab Zuweila." I laughed at him and said "That's not Bab Zuweila."

I caught another taxi to my destination. Made it safely, plus I got to see something I'd never seen before. Pity I have no idea what it was called.
Posted by Marie Javins at 9:23 AM

A taxi story I wish had happened to me because it's so funny:

My friend Kaddee obliviously hailed and rode in a regular black car, because it was morning and she was just going through her usual routine. The non-taxi driver went along with it, took her to her destination, and even accepted the regular fare.

(I know this is normal in Russia, but here only taxis are taxis.)

I think that wall you saw is the old aqueduct? It runs east-west-ish, ending up south of Sayyida Zeinab.

And _allegedly_ leaded gas is no longer used in Egypt. So I'm not sure quite why the air is so gunky--I guess just sheer volume of cars, plus no catalytic converters, etc...

Oh, no, not the aqueduct. I looked more closely. No idea. That minaret is pretty distinctive, though.

Think of it as two sightseeing opportunities for the price of one. Oh, but I guess you paid twice. Well. Cairo's unknown riches...

I asked a policeman and he said it was "Bab (something incomprehensible)." I was thinking maybe it was the Northern Gates, but it seemed to run North-South (parallel to the Nile) and I thought Northern gates would sit north, not run that way. I tried looking in my LP but couldn't find anything that matched. I am sure I could find its location on a map... but I am leaving for Barcelona in 40 hours and I've already packed all my maps!

Finally got off my lazy butt and unpacked my map.

I was by the mosque of Al-Hakim Had I a smartphone with web access instead of the world's cheapest ancient Siemens GSM, I could have looked up the AUC walking tour and had a far more interesting morning.