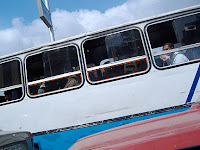 "Giza Giza Giza," hollered the conductor from the ramshackle city bus as it sputtered down Pyramids Road.

I'd just gotten out of a private car after visiting the pyramids. Jackie, who left Cairo last night for New York, was getting in some last minute sightseeing with her job-provided car-and-driver.

"Ten pounds," cautioned Jackie's driver. I understood and nodded. They dropped me off at the Saqqara turnoff. I was to spend no more than ten pounds on a taxi from there to the Giza metro station. The metro would whisk me back to Gezira Island, home to Zamalek. 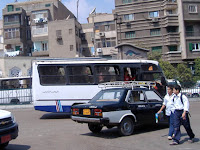 I hate taking taxis in Giza. Tourists are fleeced regularly in the area surrounding the pyramids. I carried a plastic grocery bag as camouflage—though only an empty water bottle was inside. A plastic grocery bag gave me legitimacy, might make me an expat instead of a tourist.

I scanned Pyramids Road for a taxi. Then, the bus slowed down in front of me.

The conductor nodded. Relieved, I jumped aboard as the bus was still moving.