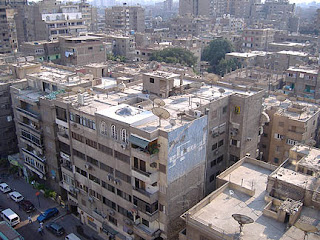 Cairo: a necessary evil to tourists, a city of bureaucrats, ancient sights and slightly less old taxis, appalling traffic, and toxic air. Home to more than 15 million people, most Muslim but plenty Christian. Horns honk, the call to prayer wails, and engines roar throughout the night. If Upper Egypt is south, Cairo must be Egypt's bottom. The butt of Africa. Spewing forth a filthy, stinking concentrate, equal parts madness and desperation.

But oh how it grows on you.

I have my routine. I wander the colonial-era streets of Zamalek, among the crumbling mansions, and I go to work in Dokki, newer city of the masses, a tan city. An overwhelmingly tan city. The first day I was in Cairo in 1999, I was terrified of the traffic. The next time, in 2001, a taxi driver grabbed my leg. Last time, I was propositioned repeatedly and flashed once.

But somehow, I love Cairo.
Posted by Marie Javins at 10:51 PM

Why _is_ that? How can such a city grow on you? And Cairenes love it a million times more than we possibly could, even though they're quick to admit all the exact same drawbacks.

Have you read Max Rodenbeck's "Cairo" The City Victorious" yet? So many great bits of information, plus many people saying very much this same sentiment...

it grows on you - kind of like fungus! (rimshot)

Thanks for stopping by Marie, and congratulations to your award (come pick it up)!

I´ll be back to read more about your adventures later...