A Night in Carrefour

"It's kind of late," I said, looking at my watch. "What if Carrefour closes at ten?"

Could it be that all the traffic was due to thousands of Egyptians pouring out of Maadi City Centre mall, all at the same time?

No, silly Marie. It wasn't too late. The masses were trying to get IN to Carrefour, not out of it.

Our driver gave up on finding a parking space. 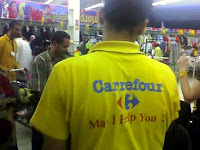 "I will wait here." He parked the car in the middle lane of the parking lot. "If someone comes, I will move."

All righty then. Cairo newbie Yasir, Craig, and I bravely blocked and pushed through the crowd and made our way into Carrefour. Must... have... smoke detectors.

In his blog, Yasir said it reminded him of Mecca during Hajj. I haven't been to Mecca (for obvious reasons), but I have been to department stores on December 26th. And to Wal-Mart the afternoon after Thanksgiving. You get the idea.

"Do you have your phone in case we get split up?" Craig asked me this just before being swept away by a wave of veiled women keen to get to the underwear sale. 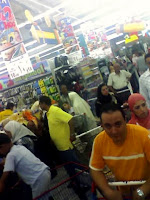 Yasir snapped us out of the shopping malaise that overwhelmed us after we searched through both hardware and electronics. He found a man with a badge.

"Do you have smoke detectors?" He pointed at one on the ceiling. I helpfully said "BEEP BEEP BEEP."

"Yes." The man motioned straight ahead into the household electronics section. We triumphantly followed his instructions. Craig wrestled six small children to the ground as they blocked our path, snarling that we wouldn't reach microwaves, phones, and certainly not smoke detectors.

Yasir addressed another man. "Smoke detectors. You have?" 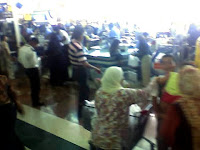 "BEEP BEEP BEEP!" I was glad to help.

This man led us back to the hardware section.

He may have been trying to lose us, as he walked briskly. He led us right to where he thought there might be smoke detectors.

He addressed a co-worker. "La. Yes, we have no smoke detectors."

Saddened, I thought perhaps I'd steal some from a hotel. Yasir asked the nice man where we might purchase smoke detectors. The nice Carrefour man described a place downtown, near Tahir Square. A place named... Bavaria.

Bavaria! Of course! When I think of Bavaria, I always heat up. Mind you, this is due to fury related to the sudden departure of my German ex-boyfriend, not related to smoke or fire. Doesn't matter. I won't forget the name of the store.

With great relief, we slowly zigzagged to the front of the store, where we were funnelled through a small "No Purchases" gate. (I felt shamed--is this the intent behind the "No Purchases" distinction?)

Then Craig led us across the hall to the quiet air-conditioned Radio Shack. He walked straight into the corner, to the shelf labelled "SECURITY."

A gleaming white smoke detector twinkled at me.

Relieved, I picked it up and kissed it. But wait. 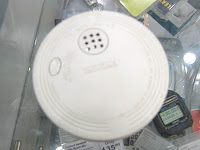 "That is a camera," said the sales clerk.

A spy camera disguised as a smoke detector? Given the shortage of smoke detectors in Egypt, it wouldn't exactly be unobtrusive. They'd be better off disguising a camera as a half-empty pack of Marlboros.

But there was a smaller, round piece of plastic.

"That is the last one," said the sales clerk sheepishly. "In all Radio Shacks in all of Cairo."

Yasir laughed outright and said "Don't be ridiculous. You're lying to me." The sales clerk giggled and went to look for the last smoke detector in Cairo's packing materials and missing back.

Twenty minutes later, we gave up on the missing parts. The last smoke detector in Cairo was only a half a smoke detector. Defeated, we fled Maadi City Centre and began the long drive back to Zamalek.
Posted by Marie Javins at 1:06 PM

Disclaimer: Small parts of this blog post have been exaggerated for comedic effect. I never kissed any smoke detector, Craig was never swept away by veiled women storming the underwear section, and no one wrestled small children during the research-collecting phase of this blog post.

I think it's fairly obvious why you cant find a smoke detector. From your description, in Cairo, the smoke is very apparent- there's no need for a machine to detect it for you.

Given the cost of labor here compared to the cost of a machine, perhaps I should hire four men to sit around and sniff the air instead. They could entertain themselves by smoking. Oh wait...

I hate to repeat myself, but I think if you visit some of the shops on Road 9, in Maadi, you just might find what you're looking for. Leave no stone unturned there, because strange and wonderful things just might fall on to your lap. Truly!

Vagabondblogger, I'm not ignoring you! I'm just very lazy and Maadi is quite a distance from Zamalek.