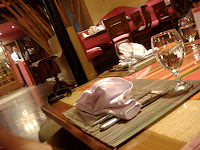 Last night, Captain M and I spent 36 pounds ($6.31) on two pasta dishes, caprese, soft drinks, and bruschetta at Dido's. Earlier in the day, my friend Dana and I had lunched on fuul sandwiches for 1.50 pounds (twenty-six cents).

But the rest of the week, it's been the high life with Mr. and Mrs. Fixit. There is not much getting around the cost of hotels in the summer here as it's high season, when tourists from the Gulf take over the hotels and better neighborhoods. Last night, Captain M and I looked at some apartments for him and were told they were eight month rentals--summers were reserved for tourist income. Anyway, the Fixits stayed at the Marriott and we've given Mr. Marriott a lot of our company money lately, for food as well as lodging.

Two nights ago, we ate at L'Asiatique on riverboat Le Pacha 1901. The Captain and I both had Thai dishes while the Fixits had sushi. It was a nice, expensive restaurant but I am dubious of the honor it received--third best restaurant in Africa in 2006. It was good but I can definitely think of more than three better restaurants I've eaten at across the continent.

More appealing was the night before at La Bodega. Granted, I'm not the biggest Cairo dining expert, but I suspect this is the best restaurant in town. Cool, atmospheric, tasty, and reasonably priced by western standards.

We seem to have nearly resolved our work crisis here, so soon Mr. Fixit will go back to Kuwait, and Captain M will be back to eating in coffee shops with his friends, while I'll be cooking soup on the hot plate in my room and getting carry-out food. But it's been a nice vacation in spite of the business adversity we've faced.
Posted by Marie Javins at 1:41 PM

Try Abou el Sid on Road 7 in Maadi or near Diwan Bookstore off 26th July in Zamalek. You can make a dinner off appetisers easy and they are great. Lucille's on Road 9 makes great cheeseburgers and there are a few nice Chinese restaurants in Maadi as well.

The guys went to Abu el Sid without me yesterday! Can you believe it? I've only wanted to go to that place for, oh, seven months. The nerve. Though we did go to Crave for dinner--a lovely place aside from the fishbowl effect, worse for me since it's under my old flat and my former fan club (bowaab, waiters at Euro-Deli) gets to watch me eat.

Anyway, I'd like to go to Lucille's but to me, Maadi might as well be the moon. How do I find it? What metro stop would I get off at? Where do I tell the taxi to go to?