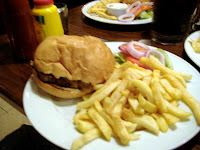 The world's best hamburger is in Egypt.

Before recruiting a couple of good sports (Craig and Cairo-newbie Yasir) for the long trek down to Maadi to visit Lucille's, I read 40-or-so blogs and Time magazine, all claiming that Lucille's had either the best burger in 1) the world 2) Africa 3) Egypt or 4) Cairo.

My company driver had never heard of Lucille's. But Craig's co-worker called him to give directions. Unfortunately, he either didn't listen, is not too sharp, or else he is terrified of me—big, scary Boss-Woman.

"You were supposed to turn after the bridge," I heard Craig mutter. The driver cheerfully sped ahead into the thick of an open-air market.

He pulled a U-ey.

"It would help if you stopped before flinging the shifter into reverse." Ouch. Poor car.

We found Lucille's eventually, just down the road from the Maadi metro station. We had to wait about ten minutes for a table, and then hilarity ensued as we attempted to get various condiments on the side. Ultimately, we each ate what we were served.

"So? Is it the best burger in Africa?"

I chewed slowly. Char-broiled. A nice taste. Soft buns. Not bad. Pretty good, in fact. It reminded me of the taste of the burgers in New York at Corner Bistro in Greenwich Village.

But best burger in Africa? I dunno. It's better than Burger Queen in Addis Ababa, which is probably the best burger in Ethiopia. I never tried a burger at Le Petit Bistro in Kampala, but given how incredibly delicious their steaks are, I'm betting their burgers are also pretty damn good. I can't claim to remember every burger I've eaten across the continent, but I think there are probably some good burgers in South Africa.

Is it the best burger I've had in Cairo?

I can't think of any others I've eaten in Cairo. I may have had one a few weeks ago, but I'm not sure. It was definitely the best burger I've had in Maadi. Possibly the best in North Africa. It was a fine burger.

Will I go back? Maybe. I don't eat a lot of burgers these days, but a change of scenery is nice.

But next time, I'll take the metro.
Posted by Marie Javins at 8:23 AM

Always hard to say what the exact best is, but ONE of the best I've ever had is here:

It's like $15, though. Fuckers. The ingredients sound disgusting but it's really fantastic. The crowd there sucks, though. Buncha studio and studio wanna be types. Fuckers.

Boss Man says it's all hype. I eat very little ground beef, unless I make it myself. I haven't been real happy with Lucille's personally, and I've tried several dishes hoping to make the Boss Man happy, to no avail.

Best hamburger is Costco's fresh burgers, grilled to perfection. It's 87% lean and tastes like a steak on a bun. I brought about 2 dozen frozen from the States with me last time I came.

Second, the old Burger King at the Hiltonia Club in Abu Dhabi. They redid the club and got rid of the burger - big loss. They went upscale.

Hands down, the best burger in Egypt is at Route 66, also in Maadi. The burger at lucille's was a greasy mess that sat in my stomach like a pool of crude oil.

Shame that Route 66 is closed for renovations at the moment - as soon as it opens up, I'm going to get my burger fix.