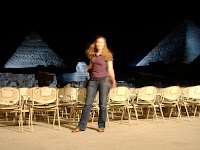 "That's the Sphinx?" Captain Muneer's voice was thin with disappointment. "It's so... small."

In our haste--undercover operations, getting a new office, filing papers, looking for a pink Mac--I'd forgotten to warn my Omani friend. The Sphinx, or Sphink-es as is said by many here, is rather wee and unimpressive. And dwarfed by its huge triangular cousins. 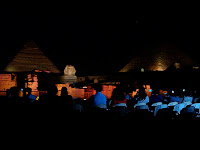 Mr. and Mrs. Fixit were in town from Kuwait, so we all piled into a chaffeured car that I'd booked with a creepy guy hanging around outside the Marriott and driven down to Giza for the Sound & Light Show at the pyramids.

I'd heard it was lame and it was. Though to be fair, it didn't put me to sleep as quickly as the Luxor Sound & Light Show did years ago.

Mr. Fixit was chortling during the narration. I tried to shoot him a piercing "Cut that out" glance but this only resulting in me giggling as well.

"The Rosetta Stone brought tears to historian's eyes as they were able to read love letters, such as 'I'd rather be with you than eat or drink.'" 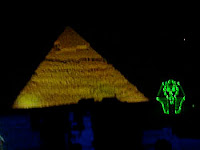 a part where a slave was saying something like "Beat me, master." It was just ridiculous.

These links tell the real story of The Sphinx. The one the tour guides are afraid to tell.