Falafel and Pizza on the Hudson Tubes 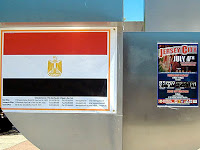 The mayor spoke at yesterday's Egyptian Festival. He said that JC was the most ethnically diverse city in America, and that 50 languages were spoken here.

Probably true, but it's hard for me to take him seriously. He is currently appealing being found guilty on charges of obstruction of justice and resisting arrest down at the NJ shore last year. He has cited all kinds of extenuating circumstances, as he did when a kid with a camera phone was able to snap a shot of him passed out half-naked on his front porch during the election.

(JC has a long history of colorful politics, from Mayor Hague to the guy who wouldn't step down in the late eighties--even though he was in prison for federal tax evason. And during the free-for-all to replace the prison guy--who some believe was involved in releasing the naked mayor photo--two brothers were running against each other, and they had a fistfight. Oh, and the prison guy is now on the school board.) 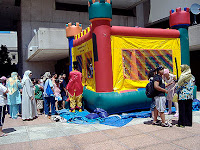 thingy, a falafel stand, and some people selling Egyptian clothes. But then some dancers and singers took the stage. I watched for a while, but I was hungry. The falafel stand in the sun didn't look that appealing, so I went over to the place two doors down from the former Tube Bar to get a slice of pizza.

I hadn't been into the Tube Bar since the early 90s, when I was there with a few friends and Unrest singer Mark, who had released the Tube Bar prank call tapes commercially, when no one knew who had originally made them. (He quit once the guys who made the tapes went public and started selling them themselves.)

Even then, it was just a bar on a walk-street (officially Concourse Street) by the PATH train (a/k/a Hudson Tubes). The famous bartender from the Tube Bar tapes, Red (you'll know him as Moe on The Simpsons) was long gone, since 1980. And sometime between then and now, the Tube Bar had closed, the bar owners taking their liquor license and moving across Kennedy Boulevard, which makes the Journal Square Pub the direct descendant of the Tube Bar.

Two doors down from the ex-Tube Bar, I got my pizza from "3 Boys from Italy." Who didn't look the least bit Italian. But they still made a good slice.
Posted by Marie Javins at 10:40 AM

Hey Marie-
I'm new to your blog...I just finished reading the whole Africa section of your 2001 trip. Its given me lots to think about for my own trip. Thanks for sharing.

Your comments about JC reminded me of this great book I read called Five Finger Discount: A Crokked Family History by Helen Stapinski. Its non-fiction set in JC and the writer captures the vibe of JC really well.

Anyway, I will have to read Five Finger Discount. Michael Kraiger read it and recommended it to me but I forgot about it until you just mentioned it.

Those "3 Boys From Italy" are probably Albanian; they mostly control the pizza biz in the New York area. Of course, given the number of Albanians who flee to Italy each year, it could be technically true...