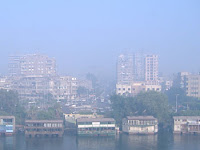 The haze of Cairo doesn't weigh on the Nile. The Nile is somehow exempt, a breezy spot among the dense concrete and dust of the city. The bringer of life is not clean, but is self-renewing as it flows from the Ethiopian and Rwandan highlands, past hippo shit, religious and oil wars, and ancient temples on its way to the Mediterranean. Two years ago I lived on the Ugandan Nile. Now I live on the Egyptian Nile. Older, wiser, damaged. Mistrustful but functioning. Like the Nile, moving with purpose but without intent. Sometimes controlled by dams, other times flowing freely. Simply continuing.

This morning, the haze of the city was nearly tangible. I've been in Cairo not quite a week, but I'm already accustomed to the view from my balcony. The legendary air pollution gives the skyline the look of a city bathed in a steam bath. But it isn't humidity. It's fumes from industrial operations, and leaded auto emissions. Carbon dioxide. Unspecificed "particulate matter." Taxi farts.

It's Friday--the weekend here. I dropped off my laundry and then waded through the air to get an iced coffee. There's a slight breeze but not enough to lift the haze. I hurried back to my room. It's a good day to use the hotel's air conditioning.
Posted by Marie Javins at 11:50 AM

Gorgeous writing, Ms J. How bout that second book, then?

Thank you. I've written two paragraphs, which if they are any indication of how the book is going to go, it's going to be a depressing book. DAMN THAT HIPPO. What did I ever do to him?

Hmmm. I wonder the same thing about the southern hemisphere...