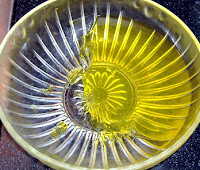 The anesthesiologist was cheerfully asking me about camping in New Jersey when I interrupted him.

The doctor looked up from the computer.

I described being chucked out into the Nile while whitewater rafting. They seemed horrified, so I decided not to mention any other risky behavior, such as swimming in the Nile for three days in 1999.

Someone stuck a tube onto the needle in my arm.

"What's your favorite country of all the ones you've been to?" I knew this trick. They like to make you talk while they knock you out.

"I'm not falling for that one. I taste it. The anesthesia tastes gross. Any second now..."

Next thing I remember, someone was calling my name and feeding me orange crackers. "No evidence of cancer but we sent parts of you to a lab to check on that Nile thing."

Note to self: Never check "Yes" to any of the boxes on the form they give you at the doctor. And only admit to being 39 or younger.

When I'd described my two gut mega-illnesses to the doctor, he hadn't been impressed. One was in 1995 and the other was in 2005. I'd considered them both some kind of DIY temporary colitis, a food poisoning aggravated by extraordinary stress. But when he glanced at the form and saw that an aunt had died of some kind of gut cancer at age 42, he said "I need to have a look."

Wha--? But I'm not sick! Can't I just wait and see if I get sick? I am moving to Egypt immediately!

"For someone over 40 with your medical history and family background, it is recommended that you get screened."

I managed to get out of there without making an appointment.

"I'll call back. I don't know my schedule. I'm flying out next week."

Hmph. I'm not sick. Why does anyone want to test me?

Then I started googling. And it all turned up the same. If you're over 40 and have a family history of blah blah blah...

Fine. That's what my health insurance is for.

So while others were eating burgers and watching fireworks, I was barely able to swallow a nasty saline solution, and the only way I got it down was with the aid of lemon Jell-O, one of the delicious treats on my list of approved foods. Jell-O. Broth. Juice without pulp. Soda. We're having some fun now.

I wasn't sick before this procedure, but by the time I ate lemon Jell-O and white grape juice for 24 hours, you can bet I was sick.
Posted by Marie Javins at 7:46 AM

thank you for clearing up a big mystery for me, my sister has been 39 for the last 4 years. I used to think it was vanity, I know better now.

Are you getting a colonoscopy?

Why, you want the video?

Nasty stuff. Hope you are ok. Assuming you got the all clear and are free to go contract more nasty bugs somewhere in Africa?

Did I ever tell you about my sister's friend who picked up a worm in DRC? He's named it (the worm) Melvin. It lives just behind his eyeball. The doctors see no point in operating as the worm is doing nothing harmful any if they start cutting things open they may damage the eye and the worm will only wiggle away when they start poking about. Apparently, on a clear day, you can see Melvin.

Oh ick! I'm sure Melvin is a nice worm but I am not good at sharing.

I get the test results tomorrow. I don't know what they could have looked for. I assume bilharzia is the number one suspect. I think I'd know if I had worms or malaria or sleeping sickness.

The health hazards of Cairo are breathing leaded fumes and drinking chlorine. Or getting hit by a taxi. So long as I don't breathe, drink water, or go outside, there are few risks.

No thanks, been there, did that. Yellow Jello just sounded all too familiar. Lemon Italian Ice is good too, btw.