You Can't Be Good at Everything You Try 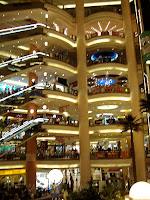 Hypnotized by the lights and escalating murmurs of the crowd, I gazed up at the six levels of mall towering above me. I was sitting in the basement level of CityStars, the swanky shopping mall out on the border of Nasr City and Heliopolis. I'd grabbed a lift in a taxi with three guys from work, en route to their Maya 3D class. I gawked up at this mall, surely the equivalent of even the largest malls in Dubai.

I had come shopping to buy some clothes. I looked in dozens of stores and found nothing. What I did find—besides banks of escalators, what seemed to be thousands of Cairenes and visiting Saudis, the obligatory glass elevators, and the Fuddrucker's burger I was guiltily snacking on—was Guess, Aldo, Accessorize, Benetton, Mango, Levi's, Calvin Klein, and Esprit. Same crap, different country.

You'd think in a mall this big and excessive, I'm be able to find something worth buying. 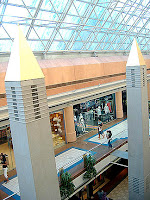 but not as good as the US parent. And that the Kuwait Starbucks franchise has expanded from their original City Center Cairo location into CityStars Cairo.

The fire alarm bell jolted me out of fast food critic mode. Startled, I looked around the food court. Would there be mass panic?

No. Cairenes did exactly what New Yorkers do when the fire alarm goes off.

I picked up two T-shirts on sale and skulked home, shamed again by my ineptitude as a clothing shopper.
Posted by Marie Javins at 12:53 PM

Do they have H and M? It's based in Sweden, I think. But they're all over. I shopped at one in Berlin. Went with my girlfriend, and was naturally complaining about shopping. Me being a boy and all. But I found tons of stuff. Pretty affordable and loads of great stuff.

No H&M here. But there's one a block from the NYC office. Strangely, I don't like the New York H&M's, but I always find some things at the Barcelona ones.

Herr Dumb@ss once did a non-scientific survey. He compared the men's underwear prices at H&M Portsmouth (UK), New York, and Barcelona. Same price in different currency!

Heh heh. Everyone here says that some H&Ms are good, some not. People here drive over the border to Slovenia to shop as we don't have them here. And the prices are pretty cheap from what I've seen. Sorry you don't have it there!

Guess what? Cairo is getting an H & M in September!

"The Other “City”
CityStars isn’t the only mall expanding — City Center, in Maadi, is also set to open a slew of new stores serving the growing needs of shopaholics across Cairo. The second phase of City Center is set to house some of the most popular shops from across the globe, with Swedish shopping sensation H&M, English clothing store Next and another Body Shop expected to open in the coming September.

The opening of H&M in Cairo comes at a great time as the store is in its prime, changing the concept of casual and affordable wear with a high-end twist, including lines from Karl Lagerfeld of Chanel fame, Madonna and even Viktor & Rolf. Watch this space for more information on the new openings at City Center."