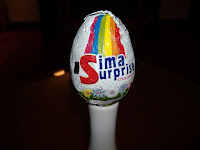 When Peter Moore rode his Vespa around Italy for his book "Vroom with a View," he was obsessed with the Kinder Surprise, a chocolate egg with a children's toy inside. These are illegal in the States, because of a law about not mixing up candy and toys. Some get through, perhaps through the highly secretive kiddie-toy black market, spoken of only in whispers.

Egypt has its own version, an locally produced knock-off. 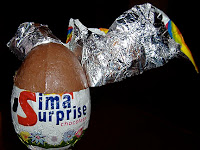 I spotted it at the Metro supermarket and though I knew the chocolate would taste awful, I bought it in honor of Peter.

It was partially unwrapped by the time I got it home, because the smirking checkout clerk couldn't make the UPC code scan without tugging at it.

Sure enough, the chocolate was disgusting. 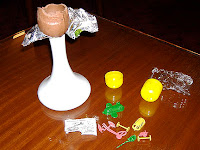 Sadly, I could make no sense of the many pieces of the toy inside, "The Sky Police's Reconnaissance Plane." I wonder how Craig is with engineering puzzles. Or if I should take it to work and assign it to the marketing department, who told me they were "doing nothing." Is it unethical to force your Egyptian marketing department to assemble knock-off Kinder Surprise toys? I wonder.
Posted by Marie Javins at 12:58 AM

Craig was able to brilliantly assemble the toy in moments. He said something about reading the directions.

My cousin in Hamburg introduced me to Kinder eggs a few years ago. The chocolate in the German ones was reasonably tasty, too. I've been hoping they'd be available here someday. And now I learn that my government is carefully protecting me from the delights of Kinder egg toy assembly. Maybe they're just too complicated for us. I'm bummed.

Everytime I am abroad I buy Kinder eggs. I recently lost Asterix's little dog from my last kinder egg. I am so depressed.