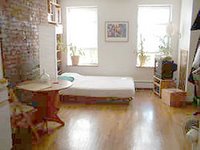 Just the other day, I was worried about having nowhere to go once I sell my condo on December 13.

Well, I still have nowhere to go on December 13. But it doesn't matter as much now, because I have somewhere to go a week later.

I've rented a studio for a month. It is not cheap, but compared to everything else I saw, it is a bargain, and clean and lovely to boot. It belongs to a 38-year-old composer who is going to a residency in Argentina for a month. 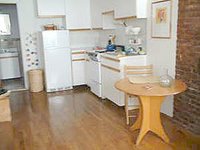 New York City and Jersey City are large places, and that it's strange that I got a place across the street from my friends, and that in JC, Yancey, Ro, and I all live on the same street. Ro only lives five doors away from me.

What she doesn't know is that in the late 80s and early 90s, everyone in my life lived either in my buiding, across the street, or next door to my building. Except for a few people who lived two blocks away. I gravitate towards creating mini-communities. Maybe that's why I'm so waffly and dazed when friends move on.
Posted by Marie Javins at 8:47 AM

Closing just got delayed until December 21! Oh happy day... thank you, gods of serendipity. Maybe they are turning to my side again.