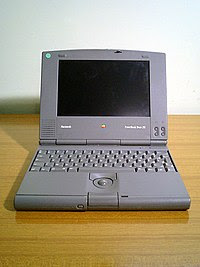 What am I supposed to do with a perfectly good, working old Powerbook Duo 230 laptop circa 1992?

It was an incredible computer in its time. It had no floppy drive--radical in 1992--but came with a cable to hook it into any other Mac or system. At four pounds, it was truly portable. The Duo was meant to be docked--that is, slipped into a desktop model--but I never owned the dock.

At some point, I bought a connector that gave it SCSI capabilities, and I have the external floppy as well. One day in the late 90s, it struggled, so I bought a cheap working Duo off eBay and cannibalized it for parts.

The Duo went on a few freighter voyages with me in 2001. Why not? It was so old, it didn't matter if it broke when I sent it home by post.

It's a little slow.

Now I'm moving. Out go all kinds of thing. Used books go to the church down the street, since they have a used book sale every Sunday. Records will go to the Princeton Record Exchange when I get around to it. The super-8 projecter goes--where the hell does the super-8 projector go?

And the old computers, they go too. But to where?
Posted by Marie Javins at 9:32 AM

Honestly....either find someone who collects old, rare, and odd Apple stuff or, take the keyboard out, add some soil, and start a small portable herb garden. If you want to get fancy, you could add a small solar panel to the screen area so you could run a small light to keep the growing going at night.

Seriously though, I'm in the same predicament with a very nice 19" Viewsonic CRT monitor. It was bleeding edge in its day and cost nearly $800. Now it isn't even worth 50 bucks and even if I advertise it for free, I don't think anybody would bother to come pick it up.

Computers go obsolete so fast compared to other things. For instance, it would still be quite possible to drive around in a Ford Model-A, but it would be quite impossible to load Microsofts latest operating system on a computer built just 5 years ago.

Go ahead, make it into a planter and let your computer live on.

I put it in my iBook box and I'm going to leave it in my garage.

Maybe if someone breaks in, they'll think it's an iBook and steal that instead of my speakers or comic books. (That probably sounds ridiculous.)

If you still have any 8mm films left, you may want to hold on to the projector.

I know I had to struggle to find my 8mm projector when my father gave me a bunch of old films.

One use for old laptops is as an automatic picture frame, but the display on that looks kinda small.

BTW... first post.. I got hooked reading your 2001 blog after a search on freighter cruising.

Gotta admit, the super-8 projector is probably going in the garage too.

The ideas for planters and picture frames are not bad, but what I haven't revealed yet on the blog is that I don't anticipate unpacking all this stuff any time soon. I mean, I've touched on it, but I need the okay from Boss X before I can say why. But I won't be able to keep any plants alive, and my photos will be in boxes or on my laptop.

Speaking of which, damn, I'm going to need to take a hard drive along aren't I? Or buy a MacBook...

Thanks for reading, Anonymous. I have been meaning to talk about freighters for a while here. Maybe I'll get to it this week.

Holy smokes... there are super-8 projectors like mine going for over a hundred bucks on eBay. Who knew?

I'm not sure about the Duo but I'd definitely hold on to the projector. I just dug out some old S-VHS tapes from the trip I did around the Equator and buggered if I can find a S-VHS VCR to play them on.

I bought a supposedly 'new' S-VHS camcorder on eBay that I had to send back because it didn't work. And a 'new' S-VHS VCR that the local hi-fi store sold me is currently in their repair shop after chewing the first tape I put in.

So if you've got the space in your garage, I'd keep it.

Well, since we are in confessional mode today, I confess I have experimented with plants and various obsolete electrical appliances. Results: TVs, monitors and computer casings do not seem to support plant life very well. I don't understand why. Drip coffeemakers and VCRs do very well, my spider plants just exploded all over them.

I confess I keep a beautiful old Super 8 projector as a doorstop in the kitchen.

And secretly, one day I hope to find a Mac-head here in Athens who will fix my PowerBook 145b (b/w screen) so I can mount it on the wall with a moving image on a loop.

And there are also fanatical Mac collectors on eBay. Do a search for your model and see what comes up.

Pity I'm moving and will have no room for doorstops or picture frames.

"The minimum we would find useful would be a PowerPC."

Quite sensible of them really, but it is a bit sad that something once so state of the art is reduced to being a burden that no one knows what to do with.

I'll put it up on eBay rather than putting it in the garage.

I just turned on the Powerbook.

It is definitely time to let go.