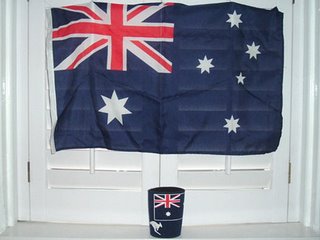 I was pulling stuff out of the top shelf of a closet, packing for my move, when an Australian flag and beer holder fell on top of me. Turbo had brought them along on his first visit to Jersey City. He'd brought enough beer holders for him, Yancey, and Kraiger to consume Budweiser while watching American football on TV, with the Aussie flag hanging in the background.

The flaw in his plan was that Yancey and Kraiger won't drink Budweiser. But they went along with the basic premise.

Turbo renovated my apartment. Not single-handedly, but he did the lion's share of the work. I don't really have much use for an Australian flag in my day-to-day life. I was thinking that maybe I'll write a note and attach it to the flag. This apartment renovated by an Australian school teacher 2004-2005. And then I"ll put the flag somewhere that it won't be found for a long time.

Maybe I'll glue it under the floorboards. Maybe I'll push it through the non-working fireplace grate, inch by inch, until it falls into the fireplace.

Because this condo, though it's in JC, really is part Australian, and once I leave, that's going to be forgotten except in block lore, mentioned occasionally by the old men on the street.

"Remember that time the guy with the funny accent rebuilt this sidewalk? We all stood and watched. That was more fun than watching paint dry, because for a change, it was concrete."
Posted by Marie Javins at 9:44 AM

Totally off-topic, I just took the afternoon off and went to see Borat. Wow, that was ridiculous. And as everyone surely knows already, had nothing to do with Kazakhstan.

Some of your readers may be surprised to learn that you went to Kazakstan in 2001.

If I link directly to your Journal entry (http://www.mariesworldtour.com/entries/0514.html) for Kazakstan, they'll go to it without the frames. Did you ever figure out a way to do that WITH the frames?

No, never figured out a way. I just link straight to the entry.

Kazahkstan has nothing to do with this movie, which was beyond absurd. Kzh is quite a nice country, actually.

MORE of those readers might be surprised to know that on opening night last week she had not even heard of Borat.

Did the Jersey City audience laugh as much as the NYC one?

There are STILL lines around the corner for every show on 2nd/12th here in town.

Um, there were only 3 of us in the JC matinee audience. We chuckled a bit. I don't know the other two people. They were probably freelancers too. It's a bit hard to be falling in the aisle laughing when there's only three people, but normally JC audiences are pretty crazed. I think I was with Yancey when people were yelling at the screen during the last 20 minutes of the third LOTR. "END ALREADY!" "YOU'VE GOT TO BE KIDDING, PUT ME OUT OF MY MISERY!" Though that might have been Turbo.

Sorry to report that JC matinees have gone up to a walloping $7.25.

Oh and leave me alone in my uncoolness. If it happened after 1999, I was either in my apartment or in some faraway land.

You're not alone, Marie. Hatboy thought Borat was a real person from Kazakhstan.

"Why are they suing him? He's probably poor."

I assume Hatboy is going to have something to say about all this... HB?