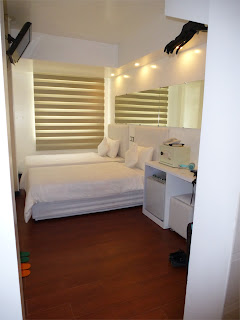 Getting out of bed wasn’t hard. I’d been up since three, thanks to two nights of sleeping on airplane across half a world of time zones.

My Clover City Center Hotel breakfast was well intentioned and even decent. The intent might have been to satisfy all customers, as everyone got a large breakfast featuring both western items and Asian items. I ate it all. I had a long morning ahead of me. I needed to get my bearings and shake off my jetlag, so I planned to follow the LP’s suggested walking tour.

But first…caffeine. The hotel morning coffee was watery and bland, like some off-brand Nescafe. Blech. Strong coffee is one thing I look forward to in Bangkok. The Thais love their coffee.

I tried to visit a local chain called Café Aroma, but it was closed for renovations, so instead I headed to something called Parisian. This is a bakery that also serves juice and coffee. I got a suitable iced latte and then headed on, down to Sule Paya, the pagoda in the central traffic circle. I can’t imagine trying to meditate in the middle of that, but maybe it makes things more challenging. 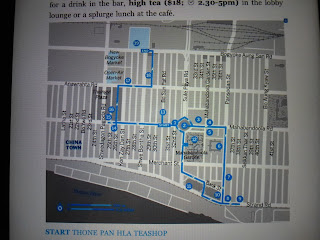 From there I headed down to the riverbank, past crumbling colonial-era buildings on deteriorated sidewalks. Various small businesses had set up shop for the day. Landlines were available as makeshift phone booths, though this must be taking a hit from all the cell phones taking over. I’d seen plenty of SIM card time sellers. Some older people offered typing services, hammering out documents on manual typewriters right there on the sidewalk. Used books lined one street, and others were full of snack vendors.

I could be in so many places. The only thing missing was the stench of diesel from the generators that powered the businesses when the power went out. Then I saw it—the generators were here. They were just huge and looked like part of the infrastructure. Maybe they are. 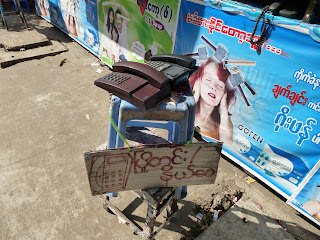 Eventually I passed what looked like a modern mall and was back at the pagoda. I took a left and went into a market area, passing the usual suspects of plastic everything, cell phones, fabrics, vegetables, and trinkets straight from China. The dollar store operates on the street outside of our familiar environment.

I stopped for a lassi as recommended by the LP—I felt kind of dorky following the guidebook, but what the hell—and watched as a man spooned yogurt into a mug and then added strawberries. I got through about half of it there on the sidewalk, on a plastic stool.

I tried to find the one synagogue in town, missed it, and ended up on a pedestrian bridge, where one of the vendors whispered furtively to another. Suddenly, there was a mad scramble as all the vendors gathered up their blankets full of shirts and hats. I imagined the police had been sighted nearby. 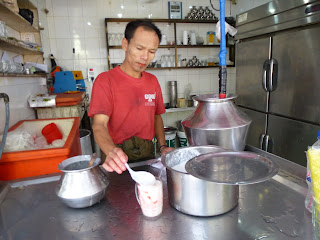 I walked some more and ended up in the market, where I sat down in a lacquer ware shop with a woman who told me her son had received a scholarship to one of the SUNY schools. He was there now. They’d just talked this morning.

“On the phone?” I asked, curious to hear the answer.

“Oh no. That’s much too expensive. We always talk on Skype.”

I bought a few pieces from her and headed back to my hotel to regroup. I needed to charge up my camera battery for my trip to the main pagoda later. 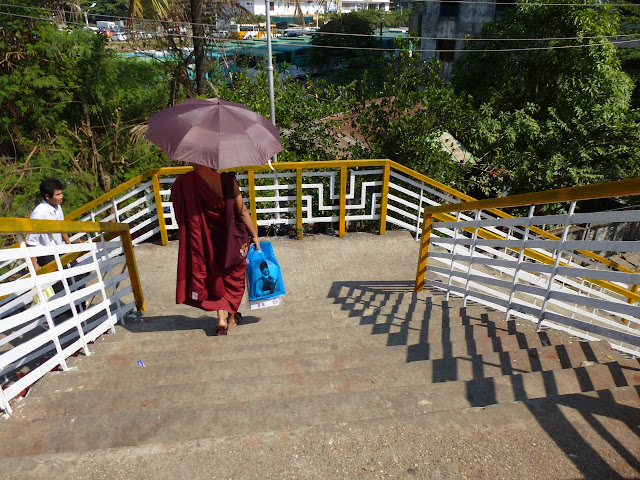 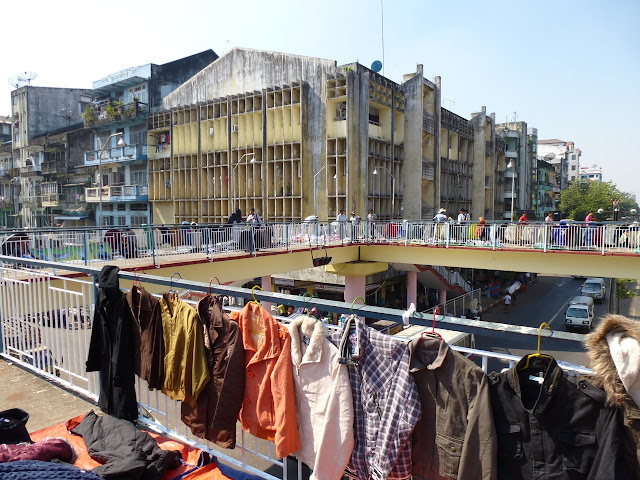