I was in Bagan—Nyaung U, actually, the small village nearby—and couldn't check into my hotel room until one.

Maybe I'd just head down to the temples and check a few out. I'd studied the guidebook on the plane (on my iPad), and worked out to highlight the things I wanted to remember.

I knew I wanted to go a few miles down the road to Old Bagan. But how? 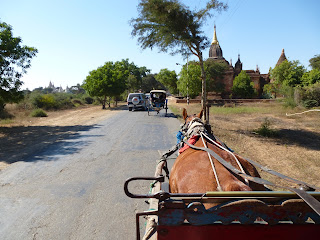 "Is there a bus?" I asked the hotel receptionist.

I went to the market. There was a "bus," which here is a pick-up truck with a covered bed. The bed is lined with two wooden benches. I'd been on these before in Thailand and Laos.

"Old Bagan?" I asked the transportation coordinator. He was a man in his mid-twenties with betelnut-stained teeth.

He motioned to the truck.

"What time?" I pointed at my wrist, which did not have a watch, but he knew what I meant. 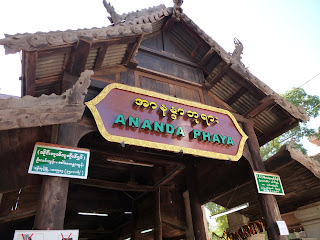 Aghast, I backed up. "No, no. Too far." I looked in the truck. Only two people, nowhere near full. He was right. This would take hours to fill up.

I promised myself to come earlier tomorrow and instead hired a horse-and-cart to take me to Old Bagan for 4,000 kyat.

Tourists and locals take horse-and-carts. These are the motorbike taxis of the region—and I couldn't get a motorbike taxi. I had even walked up to a stranger on a motorbike and asked if he was a taxi. He looked shocked, then shook his head. Embarrassed, I realized there weren't motorbike taxis in Bagan. That's when I'd retreated to the horse, like other tourists. The driver motioned me to sit in the front. "So you can see," he explained.

And off we went, clop-clopping down the road. 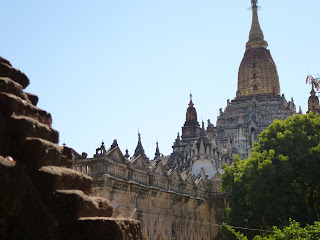 The pace was excruciating. Tomorrow I was definitely going to get up in time to catch a bus. I reasoned there would be more of them early in the day.

We passed some Burmese women waiting on the other side of the road. My driver motioned to them.

"I'll be right back after I drop her off." The women nodded slightly.

He left me at the end of a dirt road. He pointed down it. "Go that way."

It wasn't until later that I realized he'd taken me to the side entrance. I didn't have to run the gauntlet of souvenir sellers. Not yet, anyway.

I stopped in a vegetarian restaurant for lunch, then visited temples until the heat of the day made me retreat back to Nyaung U on another horse-and-cart. 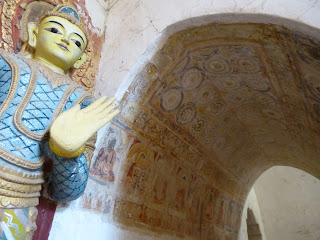 And when I got back to my hotel room and was able to check in, I was horrified. There must have been some kind of flood in this room at some point, as the floorboards were wavy and the walls were too.

One little dark window didn't open, and the walls were covered in stains. This was worse than rooms I'd stayed in all over Africa.

Not all the rooms were like that. I appeared to be in a block that was under renovation. This was probably not even used in the off-season. If there'd been anywhere to upgrade to, I would've.

But not now, not in the middle of high season. 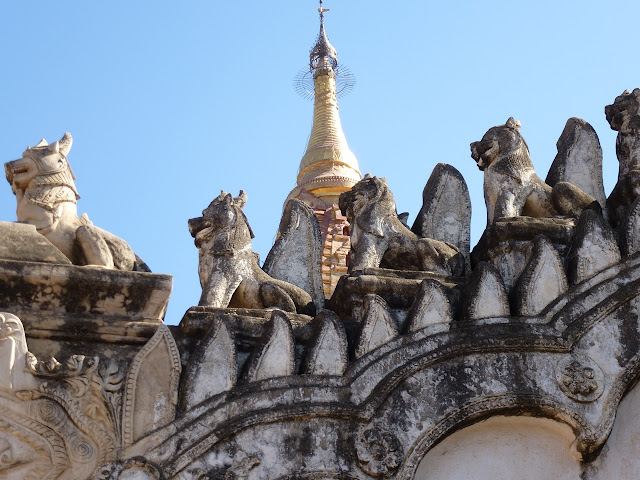 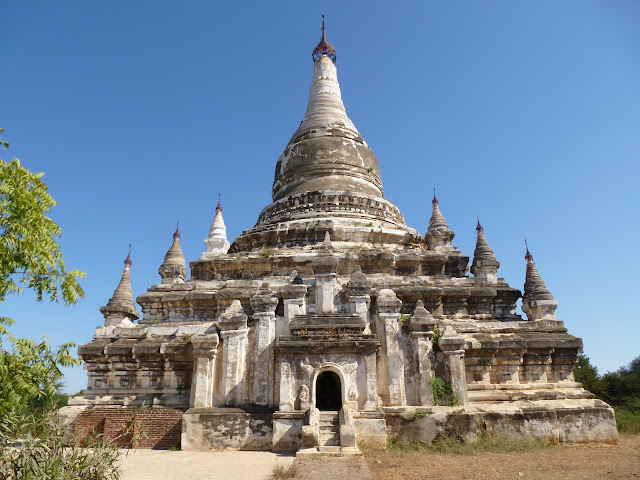 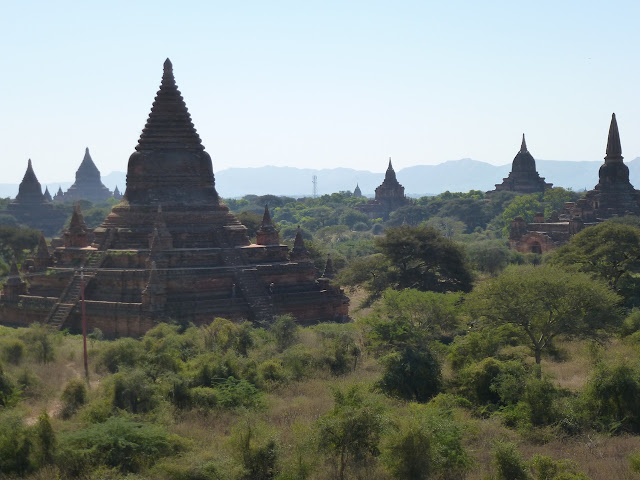