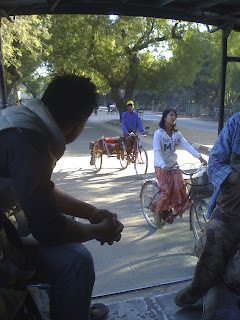 I’d been caught off-guard by the cost of things in Burma. It’s not that it’s expensive exactly—but prices on everything have gone up for everyone (not just tourists), and there is a cartel of tourist pricing that I hadn’t managed to get around. Airport taxis and the like are set, and while they’re not exorbitant, they’re not market rate either.

Ultimately, tourist pricing isn’t really something I’m sure of one way or the other. It’s good that people have a way of making money, and there is no doubt that I have more money than the rural people of Burma (I saw plenty of middle and upper class people in Yangon so this isn’t universal across the country), but then the fact is that’s MY money we’re talking about, and suddenly my ethics are challenged once I realize that holy hell, it’s $25 for a taxi from the airport in Inle Lake and I have to go to and from that airport. And there aren’t many ways of getting cash in this country, so once the cash in my pocket is gone, it's gone.

There are ways around this. For one thing, don’t take a plane. That right there saves you a ton. The bus fare for the trip from Bagan to Inle Lake is probably less than the taxi ride from the airport. And buses tend to let you off in the center of town, or close enough to walk. Another way around it is to do what the guidebook says and walk away from the airport, hoping to catch a taxi off-premises, where it’s not necessarily as set. Ultimately, I might just go along with it and pay the $25 to some taxi driver who needs it and works for it, but then there’s one small problem.

I want to make sure I have it first.

I was alarmed at the shrinking size of the wad of cash I’d brought along. (All crisp and brand new and straight from the bank.) I’d had to pay for two plane tickets and one hotel night in cash, and then I’d changed two hundred bucks right off the bat. But then of my first day in Burma, I’d realized I hadn’t brought enough money. And while I’d seen two CIRRUS ATMs in Yangon, I haven’t seen a working one in the Bagan area yet. (There is a beautiful new one but it isn’t turned on.)

When I sat down last night and counted my funds, I put aside everything I needed for the basics from now until I left the country. The airport taxis. The two hotel nights I still have to pay cash for. The airport departure tax for when I leave, because I can’t figure out from my AirAsia ticket if it’s already included or not. The entry fee for the Inle Lake area. 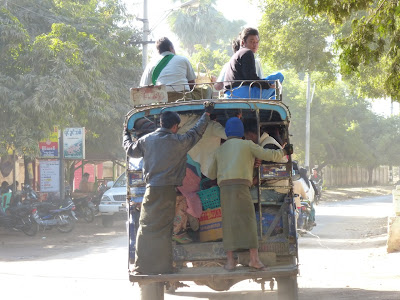 I resolved to take the local bus. Which isn’t a bus at all. Little covered pick-up trucks run the length of the main road between Nyaung U and New Bagan. They were about fifty cents a ride. But the hotel had been kind of useless on telling me how and when to catch one. I think tourists must not ask this question much, since cycling and horse-and-cart options here seem reasonable.

I'd start early, wait as long as needed, and get to Myinkaba by public transport. 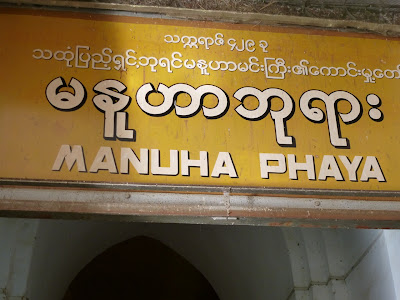 This turned out to be easy. I walked to the market, said “Myinkaba,” and someone quickly pointed me into the back of a pick-up.

Where five teenaged girls stared at me in shock. I smiled and said good morning and they cracked up. All were wearing nice clothes, so they were on their way to somewhere, and all had the local make-up, a few spots or squares of flesh-colored mud, on their faces.

The truck filled up quickly, and we pulled out to head down the road.

We had just passed my hotel when we had a flat. I laughed. This was so typical of my experiences on buses. But that's what we travel for, isn't it? The interaction with local people? Well, here was interaction. 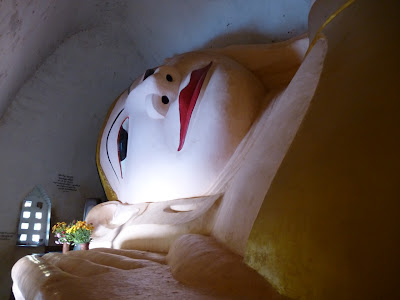 The grandma traveling with her grandson tried to amuse him with a plastic sword. They worked together to wrap it carefully in plastic. The mom next to her fed her kid (in a baseball cap) a packaged snack (he made a mess). The five girls alternated between giggling and staring at me. The truck staff crawled into the back and dragged the spare out from beneath the feet of the girls.

The spare was bald and gouged. I wondered how far they'd get on it.

More passengers approached as the staff jacked up the truck (with all of us in it). Men climbed onto the top of the truck. Women climbed in back with us.

And then the tire was changed, and there was a pause. No one knew why we were waiting.

The conductor walked off down the road. The five girls looked at me and I looked at them. We were all just puzzled now, unsure of what was going on. 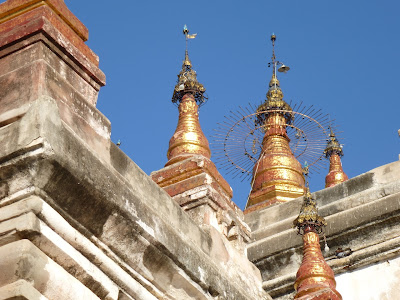 And then the conductor ran back, carrying a baby girl all dressed in bright pink. Her mother ran behind, carrying a few bags.

The conductor jumped in the front seat with the baby girl. The mother dove in after, and we were off.

Eventually, the conductor came to the back and said something to the teenaged girls. One of the looked at me and said "He wants to know where in Myinkaba you would like to go."

Ah, so maybe the school kids here were all learning English? Like in China?

"Manuha Paya." I said the name of the big temple in the center of Myinkaba. 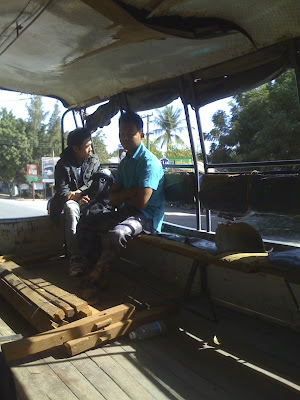 They all nodded with apparent satisfaction. A moment later, we roared into the center of a small, dusty village. The girls motioned me out. I climbed out of the truck and waved as it pulled away.

I toured Manuha Paya, looking at its big reclining Buddha and other sites, then headed up the road to look at lacquerware.

I enjoyed the factory tour, and I bought some pieces here at the source, but it had been a lot cheaper in the marketplace in Yangon.

I walked down the road toward New Bagan, stopping occasionally to examine another temple. Eventually, I was hot and sunburned and wondering how much further, and could I just hail another truck? I ran out of water. I cowered under my scarf. Then I was suddenly on the outskirts of New Bagan. A little farther and I was in a souvenir shop with a toilet. A little past that, I was eating lunch.

And finally, worn out and tired of the sun, I headed to the other end of town to catch another bus.

This time, it was a large truck, and we carried a large wooden contraption. It looked like a loom or a bed. Everyone else, not just me, stared in astonishment when a granny hopped out at her stop in Old Bagan, balanced the wood on her head, and went walking off down the road.

The truck lumbered back to Nyaung U, and when I hopped out, the driver refused to take my money.

And that didn't surprise me at all. 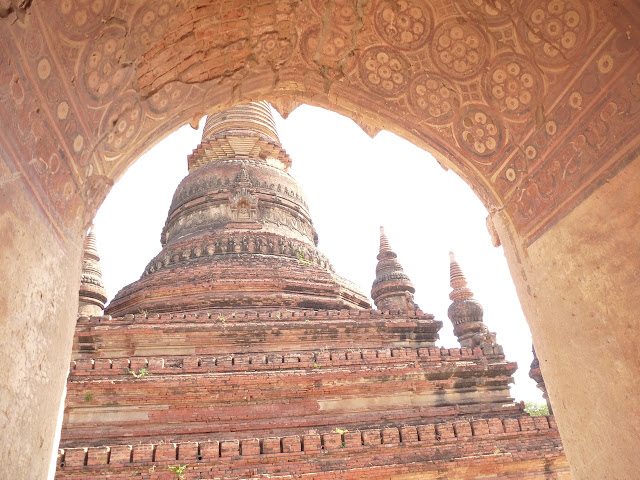 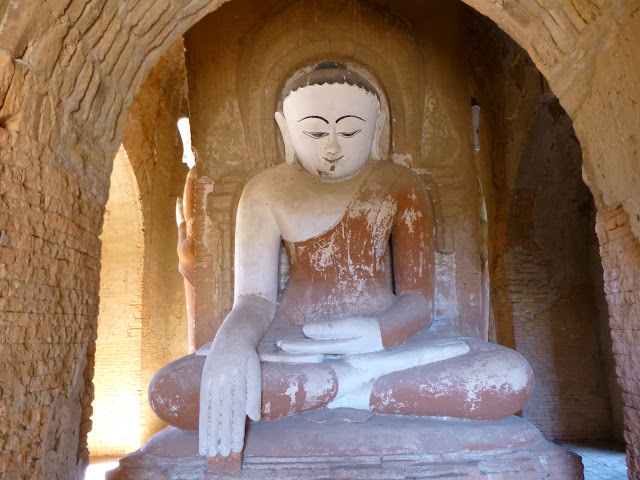