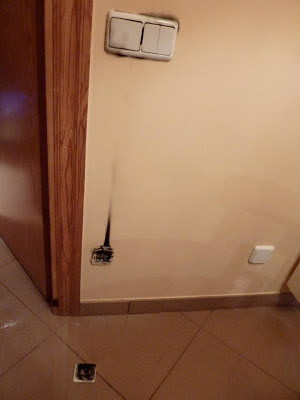 I wasn't expecting this at the place I was staying in Barcelona.

It's a nice place, really great. I've stayed there at least four times over the years and never had a problem.

So it scared me when I got back from my day of wandering and the lights wouldn't turn on. And there was a funny smell.

I used my phone as a flashlight and investigated. I followed the smell and stopped dead when I saw what had happened.

I thought about fleeing to the nearest available hostel, but packing in the dark seemed impractical. Plus, I'd paid for two nights and didn't really want to pay again elsewhere.

I found the information sheet on the apartment and tried calling the office. But it was Sunday night. I heard the phone ringing upstairs.

I texted the cell number on the form.

Ten or so minutes later, I got a text that explained to me where the circuit breakers were. I flipped two and the lights came back on.

I flipped the other two, got a small explosion, and all the lights went off again.

I waited a minute, then flipped the first two. Maybe I'd just ignore the others.

The guy who'd checked me in showed up then. "Can I see the problem?"

I showed it to him and he was pretty stunned too. We decided the electric radiator had overloaded the circuit. I couldn't remember if I'd left it on or not, but anyway, if it hadn't happened today, it would have happened the next time the weather got cold.

I didn't sleep well that night. I kept waking up, thinking "What if there's a fire?"

There wasn't. And in the morning, I left the keys on the table, pulled the door shut behind me, and rolled my bag down to the metro, to head up to the aerobus stop.

And was off to JFK.