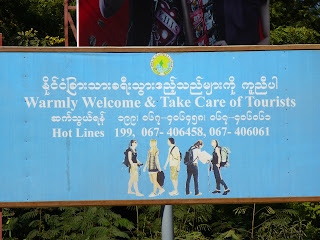 I'd realized too late that I needed to change more money. Yesterday, I'd gone to the money changer at the top of the little restaurant strip in Nyaung U. I'd spotted a brand-new ATM there as well as a small bank, but the ATM had no power and the little bank was shut.

I believe this ATM, and another I saw later, will be up-and-running soon. My guess is this is part of Burma's rapid shift to upgrade their tourism facilities, which is probably part of the whole plan in allowing an opposition party. But I am cynical. And I also fell for it.

Closed! The money changer was shut. I looked at the opening hours again. I was there in plenty of time. I had gone to my hotel receptionist.

"Where can I change money?"

We weren't getting very far. I tried a more direct approach. 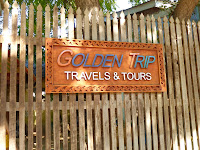 "Today is Saturday and tomorrow is Sunday, so the banks are closed. I need money now. Where can I change money now?"

"There is a money changer next to Myu Myu Restaurant, that way." She waved down the road, in the direction of Old Bagan.

In the morning, I walked down the road to find Myu Myu Restaurant. After passing the Balloons Over Bagan office three times, asking people all along, I still had no better idea where Myu Myu was. Eventually, with a lot of help of locals, I determined that the Myu Myu sign was in Burmese, but that the actual name of the money changer was Golden Trip Tours, near Balloons Over Bagan. 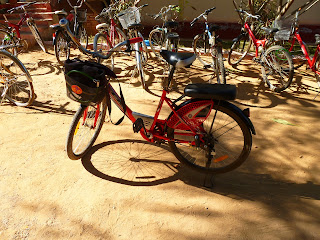 The money changer inspected my bills closely. One bizarre quirk of Burma is everyone insists on pristine new bills. I'd gotten these from the bank at home, checking each carefully for any marks or creases, and I'd carried them all along in a Priority Mail envelope to avoid accidental folding, but I'd seen other people suffering.

"No good." They'd been unable to use a bill with just the tiniest mark on it. Ridiculous. I am sure this is one thing that will change quickly. Money is money, and the surge of tourists should alter this situation quickly.

After changing money, I had enough to rent a bicycle for the day. I hadn't wanted to do this initially, since the long trip to Old Bagan looked miserable under the hot sun, but I'd worked out last night during the sunset trip that the parallel road near town had lots of little temples I could visit without too much time cycling under the afternoon sun. 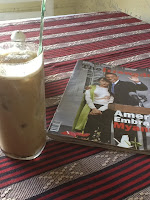 Getting a bike that fit me wasn't so easy, but I eventually found a little red one-speed that wasn't too short for my frame. I rode to a little cafe I'd spotted from the truck yesterday. Weather Spoon's isn't the British pub chain, obviously. It's a little backpacker's cafe, with delicious real coffee and wi-fi.

Alas, this only lasted until the power cut out in the entire town. That was my cue to cycle off to see the temples.

I cycled to the inland section near town, visiting temples with marvelous frescoes. There were key-keepers at these places—you couldn't wander in and out, because the frescoes need to stay where they are and not be stolen (presumably).

At the second one, the key-keeper took me in. 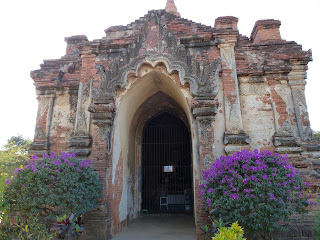 "There are 59 Buddhas," she said. "I have counted." She showed me everything with her flashlight, earning a nice tip. I'm sure that was part of the point of showing me around, but she was also bored and friendly. Not many people show up at the temples where they have to request access.

Her toddler waved the 1,000 kyat note at me as I cycled away.

I visited several more temples and all of Nyaung U before the heat got to me. I stopped in again at Weather Spoon's, then biked back to my hotel at dusk. I didn't want to cycle in the dark without a light to see the road. 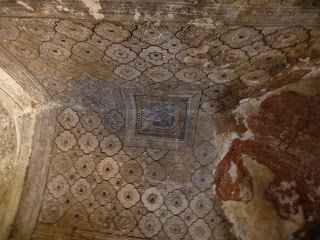 Exhausted, I couldn't bear to walk back to town for dinner. I went into the open-air restaurant next to my hotel—and was surprised to see it full of middle-class Burmese eating pasta and pizza. Why not?

The primary school age son waited on me, and he stared, fascinated at my iPad which I had brought along to read on while I ate. Apple products are big in neighboring China now, and there are a ton of cheaper knock-offs. I'm sure it's only a matter of time until he has his own, given the pace of change in Burma.

I went back to my room and packed. I'd be moving on in the morning, and I had booked a taxi to fetch me at the crack of dawn. 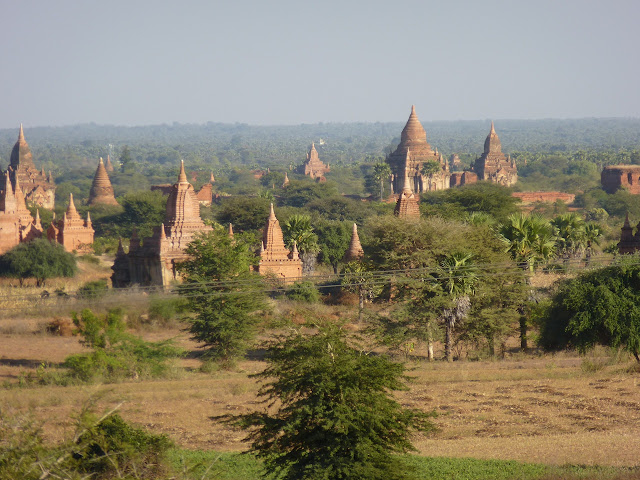 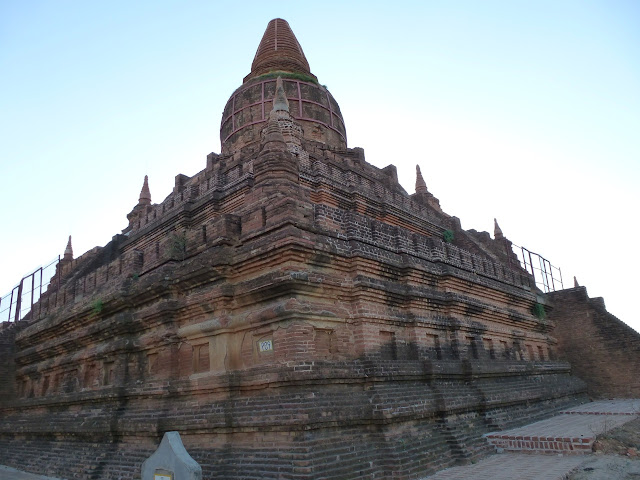 I came accross your blog as i research bout' Burma, specifically, Bagan. Do you really encourage the use of bicycle in touring old bagan? I found it cool to do so but my reservation is the proximity of each temples. I don't have problems with the weather going too high because I live in the Philippines. So much did you rented the bicycle? And did you rented other affordable modes of transportation in touring Bagan?