I did something really embarrassingly stupid yesterday. So I thought I would share.

First, I fell in love with this chicken skirt: 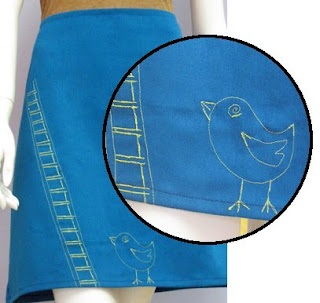 I called the store. The chicken skirt was on their website.

"Hi. I really like that chicken skirt on your site, but I wasn't sure what size to order."

"Yes," I explained. "But I don't fit into the categories. I appear to be a Small in waist, but, uh... according to your site I should order an XL for my hips."

"You must have measured wrong!"

"Well, that doesn't make sense. If you're a size four, you couldn't be XL."

I reddened, though I was on the phone and she didn't know who I was.

I thought for a minute and then blurted out:

There was a silence on the other end and then the woman diplomatically suggested I come in to be measured.

But I can't. I'm too mortified by what had just come out of my mouth. At least I called from work, so they couldn't see my name on their Caller ID.
Posted by Marie Javins at 11:15 AM

Size inflation drives me crazy! Normal is not size 4. That's supposed to be skinny. Normal is size 8-10. Sixes are slim, 4s are slimmer, and 2s are tiny little things. Now it's so bad that I just bought a pair of size 0 jeans, but my 15+ year old size eight skirt still fits great.

I won't even start on my frustration with the whole waist-to-hip ratio problem. One rant is enough (or two, if you count Facebook).

If we promise not to tell your story to any employees, can you link us to the skirt's website? I know people who would love this skirt sufficiently to have their own size inflation aggravation.

It is a perfectly wonderful chicken skirt, isn't it?

I linked to the store before a few times... it's in Brooklyn...the link is here.
http://mariejavins.blogspot.com/2008/09/brand-new-bag.html

I just don't want to type it out since google Alerts will bust me instantly.

Does the XL have an Oven Stuffer Roaster on it? -June

I don't think your response was stupid, either. Maybe thoughtless (as in you didn't think about it, it just popped out), but don't worry about it. Go ahead and get that skirt if you want it and wear it in good health.