I go to great lengths to avoid winter. In the last decade, I've only been here in the northeastern US for three winters. I'm about to tough out a fourth.

Some people don't mind the cold. I'm not one of those people.

The apartment I'm in right now is freezing most nights. It has electric baseboard heat in one room, and a big hotel-style blower in another room. That's it for the heat. Yancey, who owns the apartment, was good-natured about it and just piled on more sweaters when he lived there. Unlike him, I complain.

My old condo had no insulation. None. They didn't have fiberglass when it was built, sometime in the early 1900s. Roberta, Al, Michael Kraiger, and I insulated it. We insulated Roberta's place at the same time. We rented a blower and bought bales of insulation from Lowe's. We started out trying to carve neat holes in the plaster with a hole saw, but that wore down the blade. In the end, Al developed a method called "beat the hell out of the plaster with a hammer." It was effective. After that, the old apartment was toasty. I hope the new owners appreciate it. 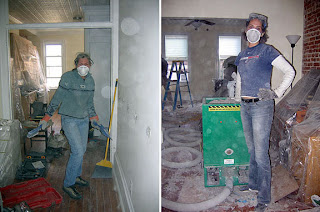 Have you considered spending the winter months in California?

It's that job thing. But maybe I could finagle Kuwait.

You must be thrilled by today’s weather forecast for the great Northeast. I don’t suppose you can telecommute if you have to work with paper and ink. Have you got any furry boots? My employer sells some that aren’t too expensive.

I haven’t been in NYC, or the Northeast, for that matter, since 1981, but I have a niece who’s living in Manhattan now--rents a two-bedroom apartment that costs $2600 a month, and splits the rent with a roomie. Her bedroom measures a luxurious 7 feet by 8 feet.

Jersey City is, no doubt, much more renter-friendly.

It's fairly unpleasant out today. I didn't wear my furry boots but I got some at Pay/Half a few years ago. They still have their tags on them, but the tags will come off tonight.

JC *is* more renter-friendly, but nothing close to Manhattan is a bargain. I'm surviving through the grace of Yancey, my friend who owns the apartment I'm renting. He's on the other coast for a few years.

I actually can telecommute, because comics are all done by files these days. But I have to set a good example.