I thought I'd managed to get rid of most of my useless old stuff back in the spring when I moved into Yancey's apartment and unpacked.

But then yesterday, I opened the green plastic bins that were on top of the wardrobe.

Inside were so many things that I just don't know what to do with. Like the wooden Appalachian dancing man I've had since I was a kid. Incredible Hulk toilet paper. A stained glass kookaburra windchime that Turbo, the ex circa 2002-2003 had gotten custom-made for me. The Casio VL-Tone from 1981. And reel-to-reel tapes of the radio newscasts I worked on in college.

I haven't ruled out retiring the kookaburra, but the rest is going back into the box. Except the reel-to-reel tapes. It's time for us to part ways.

After I finish with the wardrobe and bins, I still have an entire garage to unpack. It never ends. 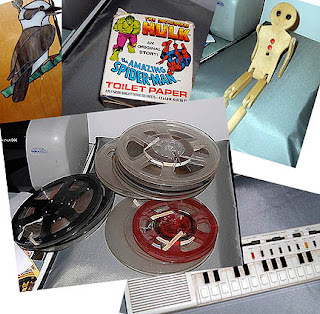 For reasons unknown, I tossed the reel-to-reel player years ago.

But kept the Super 8 projector until last year, though I had only one Super 8 movie. Go figure.

Did you just seriously ask "What am I supposed to do with this Incredible Hulk toilet paper?" That's the very definition of a straight line.

I put it there special, just for you.

Ah, the dancing man! I remember one day 32 (?) years ago when you were going to demonstrate it in elementary school and you left it at home. I hurriedly walked 8 blocks to Mt. Vernon School to get it to you before showtime.

When I read about something like Incredible Hulk toilet paper, I think eBay, myself.

I don't envy you having to finish going through the storage unit. I just finished with mine and it was a huge pain in the ass. So, good luck with all of it!

I LOVE the Casio vl-tone! It was my first musical instrument ever. And it was also a calculator. How cool is that! The bossanova beat on it is really fun.